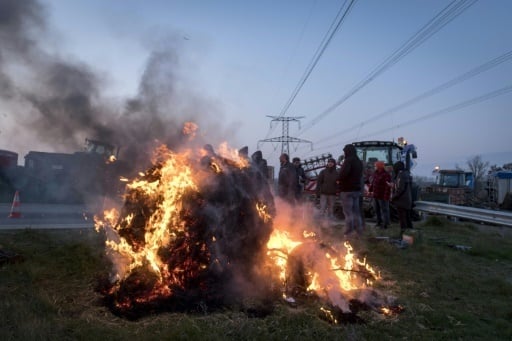 Farmers blocking the Toulouse ring road on January 31st. File photo: AFP
Farmers in the south west corner of France caused traffic chaos when they blocked roads and motorways around the city of Toulouse and the nearby town of Montauban on Wednesday.
This was all a part of the protest of French farmers against the government's plans to reduce the number of agricultural areas that qualify for farming subsidies from the European Union.
At the moment farming areas deemed “less favoured” are entitled to funding but the French government has proposed to reduce the number of areas that qualify by 100.
The decision is set to be made on February 15th and if it is agreed, the plan could go ahead as early as the spring.
If it does go ahead, the areas around the southern city of Toulouse and the Haute Garonne department in the southwest will be among the most affected, with protesters saying it would deprive them of as much as €7,000 a year. Farmers protest on January 31st. Photo: AFP
“Anger increases when people don't have a future,” a cereal grower told Le Point on condition of anonymity.
“At the moment, we are very motivated to no give an inch,” said Sophie Maniago from the FDSEA farmers union.

“It is the death of the farms. We would have losses between €8,000 and €10,000 euros. These are territories which are shutting down, which are going to become deserted, villages that are going to die,” she added.

“This is more like civil war than a protest”

One unnamed farmer told AFP: “We know that the minister's statement will not be very good for us and things are going to get worse. But the farmers have nothing to lose, this is a movement that can become violent. We do not know how far it can go.”

France's leading farmer's union the FNSEA described the plan to revise at the map of France's “less favoured” zones as “unjust” and said the European aid was “essential to support agricultural activity in these areas of low potential”.
The union is demanding a new map that is “indisputable and fair” and that “takes into account the reality of the handicaps of these fragile territories.”
On Wednesday, motorists were told it was “imperative” to avoid Toulouse and the nearby town of Montauban and, according to reports, there were about fifty farmers on the roads. Farmers also blocked the railway line between Toulouse and Narbonne passing nearby, with other blockages underway on the others motorways leading in to Toulouse.
One resident of the region told The Local: “Montauban has been more or less cut off from the A20 since January 29th by piles of manure, flaming tyres and oil barrels.
“On Wednesday most of the A61 running parallel to the Pyrenees was closed as was the Montauban bypass the A20 north of Cahors.
“This is more like civil war than a protest,” the resident added.
Protests also took place in the Lot-et-Garonne department in the south west and the Indre-et-Loire department the west-central France.
And this isn't the first time farmers have taken action against the proposal.
Last week, they set fire to piles of tires, palettes and hay and grilled sausages for picnics on the motorway, causing traffic mayhem around Toulouse.