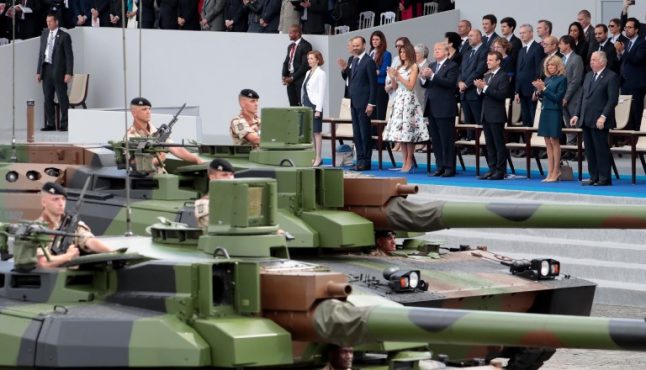 Photo: AFP
European NATO members have come under pressure from Trump to relieve the burden on the US, which currently accounts for about 70 percent of combined NATO defence spending.
The French government unveiled a bill that increases spending on the armed forces from 34.2 billion euros ($42 billion) in 2018 to 50 billion euros in 2025, taking the defence budget from 1.82 percent of GDP currently to a NATO target of two percent.
Nuclear-armed France and Britain are the biggest military powers in the European Union.
The French spending hike under new centrist President Emmanuel Macron marks a shift after years of belt-tightening in defence, which caused tension in the ranks.
Last year, the head of the armed forces resigned after a row with Macron over cuts to defence expenditure in an interim budget for 2017 agreed after his election victory in May. Photo: AFP
Macron is France's first commander-in-chief to have never served in the military, having come of age after compulsory military service was scrapped in 1997.
But he has repeatedly stressed his commitment to the armed forces, which are battling jihadists in West Africa and in the Middle East and are mobilised on the streets of France due to the domestic terror threat.
“Previous planning laws put the burden on the military. This time, we're asking for the country to take the burden for the military,” a source close to Defence Minister Florence Parly said.
The defence ministry plans to raise its spending by 1.7 billion euros a year between 2019 and 2022, increasing to 3 billion a year between 2023 and 2025.
Deficit problem
A chunk of the funds will be spent on replacing ageing armoured personnel carriers, adding more refuelling aircraft and ships and upgrading France's nuclear arsenal.
The bill also sets aside more money for the troops, in the form of better training, improved accommodation for military families and new equipment, including new bullet-proof vests and night-vision goggles.
The increase in funding will have to be balanced against commitments by Macron to tackle French overspending, which has seen the country repeatedly break European rules on deficits. General Pierre De Villiers who resigned last year after a row with Macron. Photo: AFP
France's public finance watchdog urged Macron to go further in reducing the country's debt which is among the highest in Europe.
The budget deficit is forecast by the economy ministry to dip to 2.8 percent of GDP in 2018, while the public debt is estimated at 2.2 trillion euros, the equivalent of 96.8 percent of GDP.
The French armed forces are in action on multiple fronts.
They have been taking part in strikes against Islamic State jihadists in Syria and Iraq and around 4,000 troops are hunting Islamist extremists in west and central Africa.
Meanwhile, at home, 7,000 soldiers are deployed to patrol the streets after a series of terror attacks since 2015 that have claimed over 240 lives.