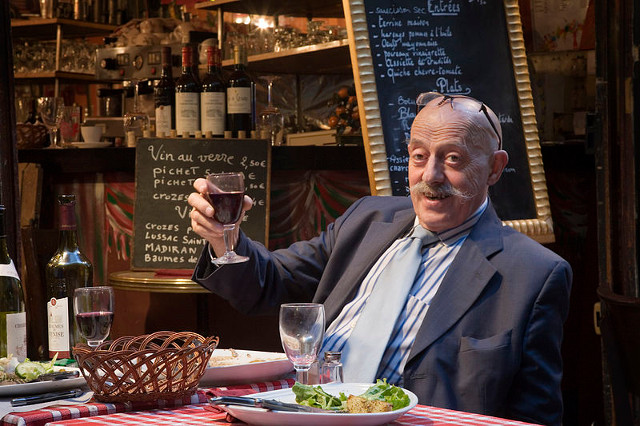 Photo: Jorge Royan/Flickr
When you first move to France it's likely you'll still be liberally pouring milk into your tea for some time but the longer you're here the more you'll find yourself happy to drink and dine a la française.
Here are just some of the ways your eating and drinking habits might change, depending on how resistant you are.
1. Drinking tea without milk
You might have balked at the idea of not having some semi-skimmed to splash into your tea when you were at home but once you've been in France for a few months/years (delete as appropriate for you) you'll find yourself turning your nose up at the very idea of it.
2. Spicy food is hard to come by
There are many (many) benefits for your stomach when you move to France but one of the things you'll find yourself waving goodbye to is spicy food. While it's easy to get a hot curry on the other side of the Channel, in France you'll have to take time to hunt one out. And you'll probably have to ask the waiter to spice it up (plus épicé s'il vous plaît).
READ ALSO: Photo: AFP
3. Eating offal
While you might take to eating French steak like a duck to water, you're likely to find your introduction to French offal slightly more challenging.
But you'll know France is truly your home when you're gobbling down tripe without a second thought (although many long-term residents still consider andouillette beyond the pale). 4. Eating is not cheating
In the UK, a (proper) night out doesn't include eating, a rule which is elegantly summed up in the phrase “Eating is Cheating”. But once in France you'll find this law is not applied. In fact you'll be laughed out of town. In France is “Eating is living”, especially on a Friday night. 5. No more snacking
Old snacking habits might die hard for expats living in France but it won't be long before you're wiping those greasy crisp paws clean for good. Eat at meals times or at the specified snack time of “gôuter”.
Here are some expert tips to help you get started on how to snack like a French person. Photo: Pixabay/WikiCommons
6.Swapping pints for demis
You'll know you've become something of a native in France when you don't feel embarrassed by ordering a half pint (demi). 7. Wine only with food
Gone are the days of ordering a bottle of Chardonnay and three glasses on a Friday night out. Wine and dine rhyme and it's no coincidence. In France wine is to accompany food (unless it's rosé and it's summer). If you want to get sozzled they have plenty of other choices.
READ ALSO: Calvados to Chartreuse: The ultimate booze map of France Photo: Jorge Royan/Flickr
And that goes hand-in-hand with our next point…
8. No more binge drinking
Despite moving to the land of the apéro and endless varieties of wine, it's time to put your binge drinking behind you and learn to drink in a more civilized way. You'll probably have a tipple a lot more often, but you'll be less likely to drink until you drop on a Saturday night.
(This one might take a while to get used to.)
9. Get your cheese fix BEFORE dessert
Moving to France means that a world of delicious cheese is right on your doorstep. And now you're allowed to eat it with every meal…as long as it comes before dessert that is. The theory is that dessert is needed after cheese so dinner guests can still talk to each other comfortably without reeling away from Camembert breath. Photo: Wikicommons
10. Eating a proper lunch
Even though the heyday of the two hour sit down lunch might be (mostly) a thing of the past in France, it's still common for work contracts to include a rule that prohibits dining al desko. French workers will also get restaurant vouchers to encourage them to eat in the nearest brasserie.
11. Swapping your weekend fry-up for viennoiserie
It's time to swap your Saturday morning rashers of bacon and fried eggs for a pain au chocolat, croissant or pain au raisin. If you truly want to go native, that is.
Photo: Glen Scarborough/Flickr
12. Eating crepes all year round
In the UK, crepes (or pancakes) are usually reserved for Shrove Tuesday but in France, praise be, you can eat them all year round.
13. Enjoying a baguette with dinner (but no butter allowed!)
The importance of the role of the baguette in French food can't really be underestimated. After a few onths you'll be buying fresh baguettes twice a day. Once for breakfast, once for dinner. And when you do, you'll bite the end off before you get it home.
Just remember the following, butter only goes on a baguette at breakfast NEVER at dinnertime. Photo: Max Pixel/Flickr
14. Espresso after dinner
While you might previously have avoided a coffee after dinner, thinking it would ruin a good night's sleep, it won't be long before you're ordering an espresso after every meal. Dinner just won't feel the same without that little shot of caffeine.
15. No more filling your glass of wine to the top
While it might not seem like such a bad thing to slurp from a glass of wine that's full to the brim at home, in France it's a big no no. So take your time, there's plenty to go around.
READ ALSO: How living in France will change your lifestyle
Photo: Marco Verch/Flickr
16. You'll discover fruit and veg
Once you see what's on offer at French markets or even les primeurs (fruit and veg stores) you'll suddenly take pleasure in sticking to the “five-a-day” rule. In France apples taste like apples and melons like melons. And you'll have to get used to what's in season too. 17. Quality over quantity
When you first come to France you'll often feel like you've been ripped off when you see the size of your main meal. Then you'll have to order two desserts. But you'll soon get used to eating less but better.
18. You'll eat a lot of pizza
You might expect this to happen if you move to Italy, but in fact the French are the world's biggest scoffers of pizza. To put it into numbers the French ate a stomach-churning 819 million pizzas in 2015. You'll no doubt be contributing to that record being broken in 2020.
READ ALSO: