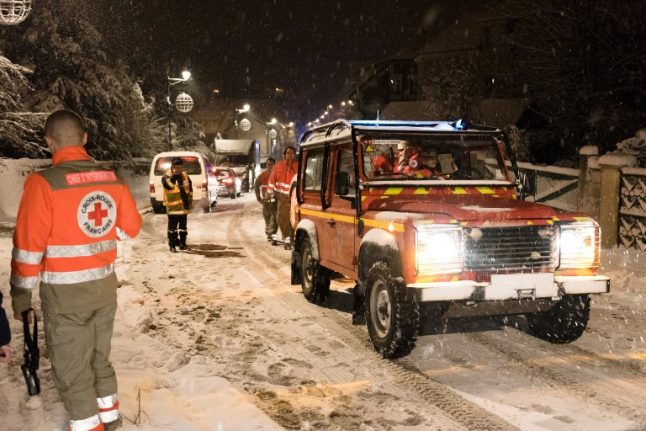 Between 12cm and 15cm of snow fell over the French capital and surrounding areas on Tuesday night, which is believed to have been the biggest snowfall since 1987.

Yet it was hardly the kind of winter snow storm we see on the other side of the Atlantic or indeed the amount of snow that falls on northern European capitals like Stockholm, but nevertheless it was enough to paralyze public transport in Paris on Wednesday morning.

Drivers were told to leave their cars at home, while rail chiefs urged passengers not to travel. Bus services in the capital were cancelled altogether. The situation was described as “exceptional” by the ministry of interior.

Some roads remained blocked on Wednesday morning, notably the N118 to the south of Paris, where evacuations were still under way to rescue the 1,500 to 2,000 people stranded on the highway since Tuesday evening. While some Parisians adopted skis to make the most of the snow others, who faced a day stuck at home unable to get to work, were left asking how could the snow – all 12cm of it, which everyone knew was coming, cause so much chaos?

On Wednesday the French government came under pressure to explain how the snow could bring one of the world's most developed cities to a near halt. The opposition party Les Republicains, were scathing in their criticism of the government.

“This morning after hearing ministers' confused explanations the French people became aware of one thing: the government suddenly discovered that it snows in winter,” said a statement from the party.

“How can we not be outraged by this amateurism and this total lack of anticipation?”

Government spokesman Benjamin Griveaux said “lessons would be learned” but simply pleaded that it was impossible to really predict the weather accurately.

“It's hard to predict how many centimeters [of snow] will fall,” said Griveaux, despite forecasts on Tuesday suggesting there would be 10cm on average and up to 20cm in the Paris area. The problems on Wednesday morning had in fact spilled over from Tuesday evening when the snow began to fall just as workers made their way home.

For her part France's transport minister explained the blockages and road closures were as a result of the heaviest snow falling at the worst time.

“The heavy snow came at the peak of rush hour,” said France's transport minister Elisabeth Borne. “That made it difficult for the snowplows and gritters to get through, because they got stuck in the traffic jams.”

Borne said some 70 gritters had been dispatched on Tuesday to salt the roads throughout the night, but accepted it wasn't enough.

“We anticipated it,but we don't have the necessary means to deal with it when 3cm of snow is falling every hour,” said Borne.

While the snow had been forecast for Tuesday afternoon and evening it still appears to have taken people by surprise.

“It is difficult to know in the morning at 8am if the roads will be blocked at 2pm,” said spokesman Griveaux who suggested motorists should have heeded the advice given by authorities throughout the day on Tuesday.

“Prevention is what we did on Tuesday when we made repeated calls for people not to use their cars.”

Those living in the Paris area are known for being attached to their cars hence the fact that even on a normal work day the region's roads are clogged with traffic. They also don't have the habit of listening to authorities' warnings to leave them at home when a few cm of snow is forecast.

S it appears that many motorists ignored calls on Tuesday not to drive.

One driver who was stranded on the N118 road along with hundreds of others overnight told BFM TV he had popped out to go shopping. That's despite authorities having urged only essential travel from Tuesday afternoon onwards.

There are suggestions that in future motorists could be banned from getting in their cars altogether when there is heavy snow – just as they are when air pollution spikes – unless they have snow chains. For her part France's transport minister explained the blockages and road closures were as a result of the heaviest snow falling at the worst time.

“The heavy snow came at the peak of rush hour,” said France's transport minister Elisabeth Borne. “That made it difficult for the snowplows and gritters to get through, because they got stuck in the traffic jams.”

While the Paris region does possess a number of gritters and snow plows, the number was clearly not enough to cope with the heavy snow of Tuesday night.

And while certain members of the public called for more to be made available, the reality is Paris is rarely hit by heavy snow so it would be unreasonable to expect authorities to be able to react as they would do in a city like Montreal or Stockholm.

The government is reluctant to spend money to prepare for an event which rarely occurs.

“We are not going to adapt our infrastructure for an exceptional moment which occurs every 4 or 5 years,” said Griveaux.

“Sometimes nature is just more powerful than us. We can't demand the authorities to get equipped as if we were in Canada when this kind of episode happens so rarely,” said Barbier.

But perhaps Parisian drivers could accept leaving their cars at home if public transport was guaranteed to get them to work on time come rain, sun or snow. But sadly that's not the case. Bus services were stopped altogether in Paris simply because many roads had not been gritted or cleared and were not considered safe enough.

As for the chaos on the rails, since Tuesday afternoon TGV services have been hit by major delays and commuter services in Paris cut by half, with authorities insisting that safety has been the priority.

SNCF said speed restrictions were placed on high speed TGV trains on Tuesday due to the dangers caused by ice blocks forming underneath the carriages. When two trains pass each other at high speed the blocks can dislodge, fly off and cause major damage to the train.

Secretary of State to the Minister for the Ecological and Inclusive Transition, Brune Poirson told BFM TV: “In very cold conditions like this, the ice builds up under the trains, and if you drive too fast, it can be extremely dangerous.

“So we voluntarily halved the speed of the trains and especially the TGV to ensure the safety of travelers.”

Nevertheless that doesn't explain why around half of the much slower commuter train services in the Paris region were not running on Wednesday morning.

A spokesman for SNCF told The Local the delays and cancellatons were due to various reasons such as trees having fallen on the tracks as well as heavy snowfall that covered certain lines. Equipment such as points  – the sections of track that move, acting as junctions and allowing trains to move from one line to another – had also frozen, the spokesperson said, adding that the cold had caused material damage to some equipment.

Some 2,500 SNCF agents had been mobilized to clear the tracks and to ensure that all equipment was working safely.

Essentially the explanation to the question of how so little snow could cause so much chaos is that we are just not used to it in Paris. The last major snowfall in Paris was in March 2013 which also caused travel chaos and before that it was 2010.

Memories are short, finances are thin and the world is getting warmer so when it does snow in Paris, it appears we are just going to have to accept the chaos or invest in a pair of skis.