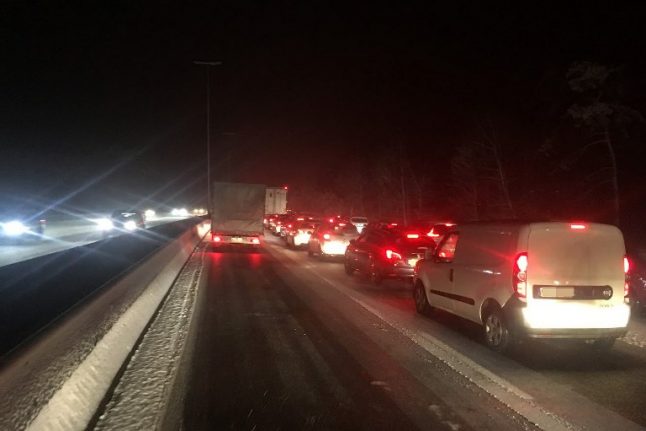 Please CLICK HERE for the latest story on how the snow has caused travel chaos in Paris on Wednesday morning. The information below is from Tuesday evening. An up to date news report can be fund by clicking the link above. Snowfall caused travel misery on rail and roads in France on Tuesday as train services were hit, tailbacks reached record levels around Paris, bus services were halted and lorries were barred from the busiest roads around the capital.

At around 1pm authorities in the greater Paris region of Île-de-France raised the level of their “snow and ice plan” to “three” which meant HGVs were not allowed to circulate on the region's main arteries. Trucks either have to accept detours or stay off the road.

By Tuesday afternoon temperatures had dropped below zero in the Paris region.

Police also warned motorists in the Paris region to avoid all unnecessary travel and Sanef, which runs motorways in the area urged drivers to stay clear of the autoroutes until Wednesday morning to avoid getting stuck.

By Tuesday evening as workers headed home traffic jams began to clog the main arteries around the French capital. They had reached a record combined length of 739 km by 7.30pm.

were advised to head home on Tuesday as early as possible and stay off the roads until Wednesday midday.

There were road closures between the A1 and the perpherique ring road and the N 118 was blocked in both directions causing traffic jams two hours long.

All bus services in the capital were suspended as snow settled on the roads making them dangerous for vehicles.

A bad night to be driving home in Paris… but a good one if you like running in the snow….#neige pic.twitter.com/HKfs34wWYA

The Orlyval train shuttle service was also suspended making access to Orly airport difficult. The public were also told to avoid Gare Saint-Lazare in the capital due to the the huge disruption to services.

Numerous departments across France suspended all school transport on Tuesday due to the dangerous driving conditions.

In Paris where snow was falling gently throughout Tuesday, the Eiffel Tower announced just before 1pm that it was closing to the public due to the weather conditions.

Due to weather conditions, the Eiffel Tower is closed for all our visitors. We’ll keep you informed of the situation on Twitter and Facebook https://t.co/zt3BpFY51c. #EiffelTower pic.twitter.com/6c169w4GsY

TGV trains were forced to cut their speed from 320km/h to between 220 km/h and 160 km/h in areas hit by snow causing delays of around 20 minutes on average on most services, according to SNCF.

However there were reports of delays of up to two and half hours on some services heading into Paris from western France, which caused the ire of passengers who couldn't understand the delays given the snow was only light.

“A two hour delay for 5cm of snow is not normal,” said one passenger.

SNCF argue that speeds need to be reduced due to the dangers caused by ice blocks forming underneath the TGV trains. When two trains pass each other at full speeds, the ice blocks can break off and damage the trains, the company say.

The lines affected were those which served the west coast from Brittany down to Bordeaux as well as the high speed line to Strasbourg in the east.

On Twitter passengers reported their train driver being forced to get out of the train himself to clear away snow from the tracks.

Two TGVs that were supposed to link Paris and Bordeaux were cancelled on Tuesday due to the weather while passengers were also blocked on trains between Tours and Poitiers due to the impact of the freezing temperatures.

In all, some 32 departments in France remained on alert on Tuesday afternoon for snow and ice (see map below).

The snow is set to get heavier throughout the afternoon with around 10cm forecast in the Paris area, although it could reach 20cm locally. It looks set to continue falling until late Wednesday morning.

The snow did of course result in some spectacular photographs like these taken at the Palais de Versailles near Paris. The cold snap marks a sharp contrast from the weeks of mild and rainy weather across northern France in recent weeks, prompting flooding in several
areas and pushing the Seine River to more than four metres above its normal levels as it flows through the capital.

That forced the closure of Paris station along a main RER commuter line, which will not be reopened until Saturday at the earliest.