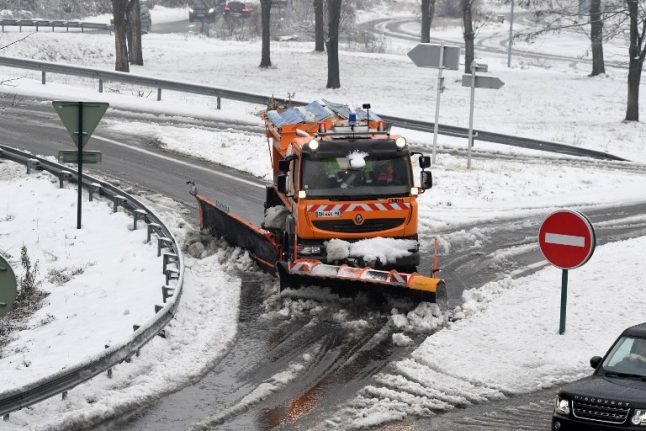 After the floods comes the freeze.

Much of France is still drying out after weeks of rain that have caused flooding in Paris and its surrounding area but it was the return of the icy weather that provoked more warnings on Monday.

By midday on Monday some 45 departments across France (see map below) were on orange alert – the second highest warning level – for snow and ice.

The areas on alert stretched from the department of Aveyron in the south to Paris in the north and from Moselle in the east to Loire Atlantique in the west.

More snow is forecast to hit the country on Tuesday, with the north and east set to be hardest hit.

In the capital Paris snow started falling around 10am but then started to get heavier throughout the morning.

Here's @Eviebt on the snow report from Paris where she overcomes the extreme cold and a hail of snow balls… #neige pic.twitter.com/6272CowyA5

Forecasters predict there could be up to 10cm of snow on lower ground with 30cm over the hills.

French authorities have taken steps to reduce risks especially on the roads and have enforced traffic restrictions in certain areas.

In Ardeche all school transport has been suspended due to the snow and in Isere and Haute-Loire restrictions are also in place that bar heavy goods vehicles from using certain roads.

The Interior Ministry has warned the public to avoid unnecessary travel and to grit the paths outside their homes.

Temperatures are forecast to remain at around zero or just above for much of the week. Authorities in Paris have instigated their emergency “cold plan” which will see extra accommodation opened up to homeless people.