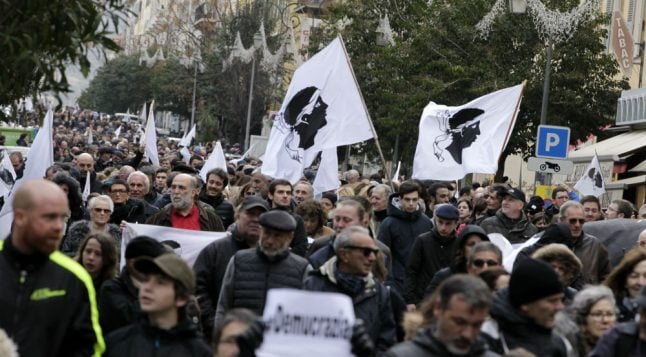 The marchers are demanding greater autonomy for the island. Pascal Pochard-Casabianca/AFP
Protest organisers said up to 25,000 people attended the demonstration in the island's capital Ajaccio, but officials gave a far lower estimate of some 6,000.
“This is a mobilisation without precedent in recent years. It's huge,” said nationalist leader Gilles Simeoni, who has stopped short of calling for full independence for the island. “It sends a very strong message by Corsicans. I hope that (the French President) has heard what we have said today.”
The march opened with young girls wearing Corsican flag's over their shoulders, as the crowd chanted “long live the independence struggle” and “killer French state”.
A sign on the lead car in the protest read “Amnistia”, a reference to one of the main demands of the nationalists: amnesty for Corsican prisoners jailed for pro-independence violence. The nationalists also want the Corsican language to have the same status as French, and for people from other parts of France to be restricted from buying property on the island. The protest aimed to “convince” Macron to “open a dialogue”, Simeoni told AFP ahead of the march.
The nationalists, who have governed the island of 330,000 people for the past two years, achieved their best-ever performance in December's regional election. The Pe a Corsica (For Corsica) alliance won two-thirds of the seats in a new regional assembly, a result which it argued gave it a strong mandate to demand more autonomy from the centralised French state.
Macron will visit Corsica exactly twenty years since France's top official on the island, Claude Erignac, was shot dead on 6 February 1998 by a pro-independence activist. He has previously said he is open to dialogue but ruled out making any changes to the constitution, effectively rejecting the nationalists' demand
for special status for the territory.
Corsica, famed for having some of the best beaches in Europe and for being the birthplace of Napoleon, was once a hotbed of violent anti-French militancy.    For decades militants waged a violent “national liberation” campaign, but in 2014 they announced a ceasefire.