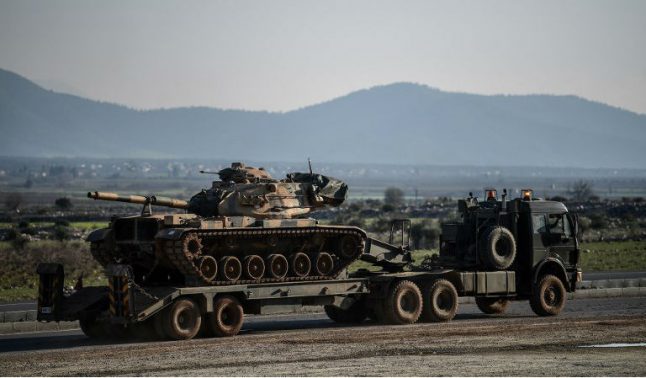 A Turkish tank on the way to the Syrian border to take part in the Olive Branch offensive agains the Kurdish YPG militia. Photo: Ozan Kose/ AFP
The announcement came after Macron spoke by telephone with Turkish President Recep Tayyip Erdogan on Saturday which discussed in particular Turkey's operation against Kurdish People's Protection Units (YPG) militia in Syria.
Macron had incensed Turkish officials last week by saying in a newspaper interview that France would have a “real problem” with the campaign if it turned out to be an “invasion operation”.
Turkey's state-run Anadolu news agency reported Saturday that Erdogan had sought to reassure Macron during their talk, saying Ankara had no eye on Syrian territory.
“The two presidents agreed to work on a diplomatic road map for Syria in the coming weeks,” the Elysée Palace said.
“To that end, discussions between France and Turkey, which both hope for a political solution overseen by the UN, will increase in the coming days.”
On January 20 Turkey launched its “Olive Branch” operation in northern Syria against the YPG, which it brands a terror group.
On Sunday it said it could expand the incursion beyond the northwestern enclave of Afrin, to the town of Manbij and possibly east of the Euphrates river.
But Turkey's Western allies do not classify the YPG as a terror group and have worked closely with its fighters in the battle against Islamic State (IS) jihadists.
Erdogan has sought to build a strong relationship with Macron despite rocky ties with the EU, visiting Paris in January for talks.