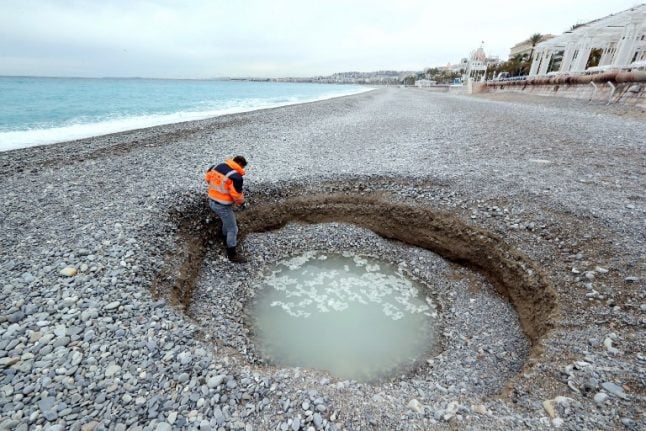 There's a mystery afoot in Nice and everyone seems to have a theory.

One passerby suggested the hole was made by a meteorite. What we do know is this: A hole that is five metres in diameter and 2 metres deep – and which is almost perfectly round – has showed up on the Lido beach in Nice, just off the famous Promenade des Anglais.

The water inside it is salty, no surprise really considering the hole is just a few metres away from the sea.

While locals have been wondering about the story behind the crater, authorities haven't wasted any time in cordoning off the area. On Friday, they brought in a digger in an attempt to fill in the hole.

The Mayor of Nice, Christian Estrosi, wasn't interested in the speculation, tweeting out that the hole was nothing but a “natural phenomenon that happens four times a year”.

Experts told Nice Matin that the crater was nothing more than a shift in the layers of sand and beach pebbles, caused by the weight of the stones on the sand below.

They pointed out similar occurrences in the same area in recent years. In any case, the beach has been closed for the day while City Hall workers return the beach to its normal state.

Meanwhile, residents are sure to be keeping an eye on the beach for the last weeks of winter in case of any more unusual phenomena.