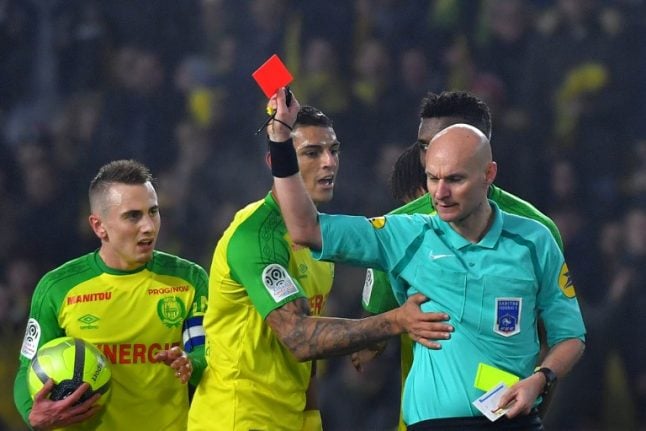 Photo: AFP
Tony Chapron, 45, kicked Diego Carlos of Nantes towards the end of the match against Paris Saint-Germain on January 14 after being knocked over when the pair collided.
Chapron sent the player off before apologising the next day, saying Carlos had bumped into him but that his own reaction had been “clumsy” and “inappropriate”.
The French Football Federation (FFF) suspended Chapron “until further notice” and the league's disciplinary commission met Thursday in Paris with Chapron attending the two-hour proceedings with his lawyer.
“The meeting took place in a calm atmosphere which was in contrast to the media lynching (around the affair),” said Samuel Chevret, the referee's lawyer.
READ ALSO:

At the time of the affair, the FFF said in a statement that Chapron had reviewed video footage of the incident and “noted that his fall had been caused accidentally”.
Chapron apologised, saying in a statement to AFP: “The Nantes player, Diego Carlos, crashed into me.
“At the time of the collision, I felt a sharp pain where I had recently suffered an injury. My unfortunate reaction was to stick my leg out towards the player.”
Several weeks before the incident, Chapron had announced that he planned to retire from refereeing at the end of the season.
He has been refereeing in France's top flight since 2004 and has taken charge of more than 400 matches, including the French Cup final in 2014. In October, he refereed a game in the Chinese Super League.
Before Thursday's hearing FFF president Noel Le Graet said: “He's someone who has done a beautiful job. He has made a small mistake, that he clearly recognises. Killing him at this point achieves nothing. He's someone who deserves respect.”
There are almost no precedents for Chapron's offence in France. In 2015, Philippe Kalt lost his chance of refereeing the League Cup final for elbowing away Adamo Coulibaly while showing a card to another Lens player. But he was back refereeing in Ligue 1 before the end of the season.
Footage of Chapron's kick went viral across the world.
Nantes president Waldemar Kita, who was seen laughing incredulously after the red card was shown, said he spoke to Chapron at the end of the game.
“He told me that he had never wanted to kick the player and that he had felt himself pushed in the back,” he told French television.
“It's a joke. I got 20 text messages from across the world telling me this referee is a joke.”
Nantes midfielder Valentin Rongier had a good view of the incident and called for the referee to be given a long ban.
“He says he slipped, but I know he kicked him,” Rongier told Canal+.
“I know it's very difficult to referee but you have to question them from time to time… We do that, we get a 10-match ban.”