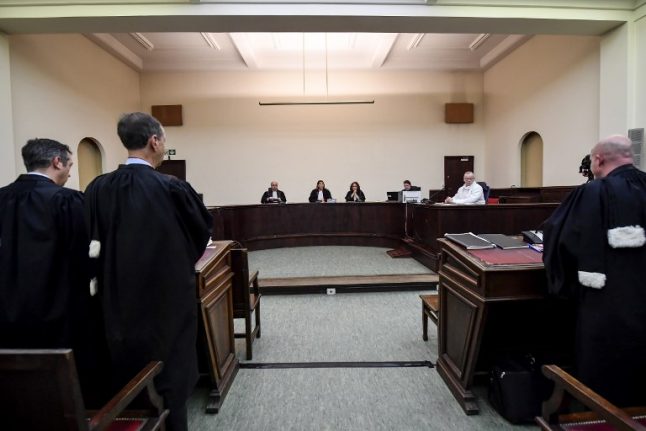 An image from the first day of Abdeslam's trial in December. Photo: AFP

But the sole survivor of the jihadist team that wrought carnage in Paris in November 2015 — who goes on trial in Belgium on Monday over the shootout — remains something of an enigma.

Abdeslam is suspected of playing a key role in the November 13 attacks when Islamic State jihadists killed 130 people enjoying a Friday night out.

A 28-year-old French citizen of Moroccan origin, he rented cars and the hideouts used by the attackers and is believed to have also helped several jihadists get into Europe via the migrant trail.

On the night of the Paris massacre, he was equipped with a suicide belt.

But unlike his brother, he did not activate his device which was found in a rubbish bin several days after the massacre.

After four months on the run, Europe's most wanted man was caught in Brussels' Molenbeek neighbourhood, telling investigators he had planned to blow himself up outside the Stade de France but changed his mind.

But French radio this week quoted him as saying in a message found on a computer that the suicide belt was, in fact, faulty. Abdeslam has also been linked to the jihadists behind the Brussels airport and metro bombings in March 2016, which took place just four days after his arrest.

Since being transferred to France, however, he has refused to answer questions, infuriating investigators and victims' families, who are hoping for answers at his Belgian trial.

He and a suspected accomplice, Sofian Ayari, are charged with attempted murder over a shootout in the Forest neighbourhood of Brussels that eventually led to their capture, in which three police officers were injured.

A wounded Abdeslam was finally captured three days later in Molenbeek, where he once ran a bar with his brother Brahim, one of the Paris bombers.

No date has yet been set for his terrorism trial in France.

Jailed in Europe's biggest prison at Fleury-Merogis, south of Paris, Abdeslam is being held in solitary confinement and monitored around the clock.

In recent months, the conditions of his detention have been slightly relaxed after signs his mental health was deteriorating.

For the trial, he will be moved to a high-security prison in northern France which is closer to Belgium.

Although he has refused to answer questions during five interrogations by investigating magistrates, he has responded to a woman who wrote to him in prison.

“I'm not ashamed of who I am,” he reportedly told her.

Friends of the Abdeslam brothers say they showed little outward sign of religious fervour before the bloodshed.

Both were known to enjoy a drink and smoke marijuana in Les Beguines, the bar they ran in Molenbeek, a predominantly immigrant neighbourhood of Brussels which is a hotbed of Islamic extremism.

“I asked him if he had read the Koran, and he replied that he had researched it on the internet,” his former Belgian lawyer Sven Mary (pictured below) told the French daily Liberation.

Last year, an internal Belgian police report said police in Molenbeek had warned their superiors in early 2015 that the brothers were radicalised, having linked them to Abdelhamid Abaaoud, the ringleader of the Paris attacks and a known IS member. Abdeslam had previously worked as a technician for the Brussels tram network but was fired for skipping work in 2011.

He and Abaaoud — who was killed in a French police raid days after the Paris attacks — had previously served time in prison together for armed robbery.

In 2015, Abdeslam visited several countries along the migrant route through Greece, which at least two of the Paris attackers used to slip into Europe on fake passports.

Prosecutors believe he was in charge of logistics for France's worst ever terror attack, which was planned in Brussels.

His brother Brahim Abdeslam, 31, was part of the team of bombers and gunmen that targeted bars and restaurants in the east of Paris. He blew himself up outside a bar, seriously injuring two people.

The younger Abdeslam slipped through the fingers of the police as he was being driven back to Belgium the next day by two accomplices.