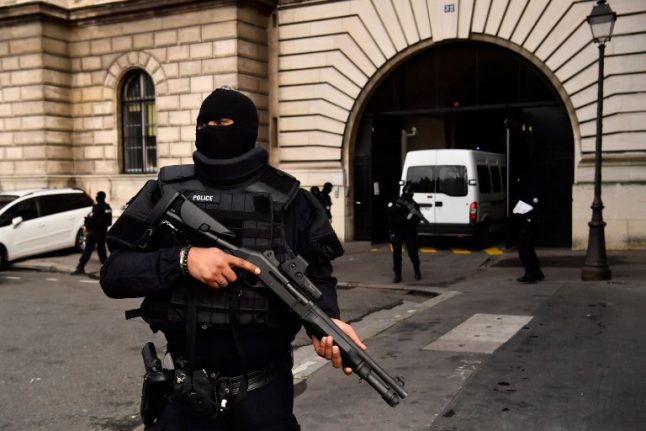 Among them were relatives of the 90 people massacred at the Bataclan concert hall in the attacks that also targeted the national stadium, bars and restaurants.

Jawad Bendaoud and Mohamed Soumah, accused of harbouring jihadists in the aftermath of the carnage that left 130 people dead, wept as a mother spoke of her pain.

“Every time I talk about my son, the tears start flowing,” said a woman named Iordanka, who like others testifying requested to be identified by only her first name.

“My life is hard now,” she said, describing how her 37-year-old son was shot seven times.

And she said the two accused — along with a third defendant on trial for failing to report the jihadists — deserved to be “punished severely”.

“It's not them who killed my son, but they more or less contributed to it,” she said.

The court has been packed since the trial opened Wednesday, with France closely watching the proceedings as the only survivor among the 10 attackers, Salah Abdeslam, prepares to go on trial in Belgium on Monday.

Bendaoud, a 31-year-old drug dealer (pictured below in a court sketch), is accused of renting his apartment to senior Islamic State jihadist Abdelhamid Abaaoud — the suspected coordinator of the attacks — and his accomplice Chakib Akrouh. Anti-terror police killed Abaaoud, Akrouh and Abaaoud's cousin Hasna Aitboulahcen in a ferocious assault on Bendaoud's flat in Saint-Denis north of Paris on November 18, five days after the attacks.

Bendaoud became a national laughing stock after a now-notorious television interview outside the apartment in which he insisted, “I didn't know they were terrorists”.

His apparent lack of curiosity about the men, at a time when the country was on lockdown in the hunt for fugitive jihadists, spawned endless jokes and internet memes.

Bendaoud, who has a long criminal record, said he had previously rented the grubby flat to Eastern European gangsters without asking questions.

Parents expressed anger over Bendaoud's behaviour during the trial, which has in recent days seemed more like a sketch show due to his theatrical antics.

On Friday he complained that most men forced to stay in their cell for as long as him would “cut off their testicles”, and accused one of the lawyers of being “psychologically unhinged”.

“What shocks me is the lack of seriousness with which Mr Bendaoud and Mr Soumah are taking this trial,” said a man called Abdallah, who lost both of his sisters.

“Behind those who are on trial today there are families that have been obliterated.”

A father called Patrick said Bendaoud was making a mockery of the trial, transforming it into a “street performance”.

“I was outraged to hear laughter during these debates,” he said. “I'm not laughing. I'm not here to see a show.”

Co-defendant Soumah apologised to the victims last week, but Bendaoud has yet to follow suit.

Meanwhile four men have been arrested as part of the enquiry into the weapons used for deadly attacks, also in 2015, on the office of the Charlie Hebdo magazine and a Jewish supermarket, a judicial source said Tuesday.

The men, aged between 30 and 36, were picked up on Monday and Tuesday and will be questioned “to determine whether they played any role in providing the arms” used in the attacks, the source said.

Twelve people were killed when gunmen attacked the offices of the satirical weekly Charlie Hebdo in January 2015, and four more died when a kosher grocery store was attacked two days later.