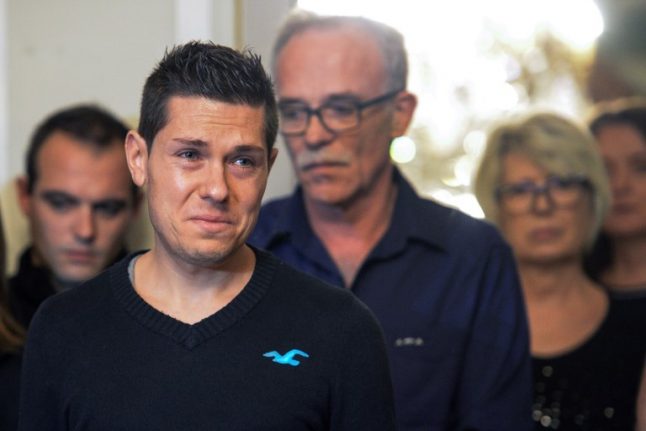 The body of Alexia Daval, a 29-year-old bank employee, was found hidden under tree branches near their town of Gray-la-Ville in eastern France.

Her husband Jonathann Daval, 34, had previously insisted that Alexia had gone jogging on October 28 and never come back.

In the days after her death he cut a distraught figure, appearing in tears at a press conference with her parents and leading one of the running outings organised across the country in her memory.

But his lawyers told reporters that Daval had finally admitted he killed his wife, though “he says it was an accident, that he did not want to do it, and that he regrets it”.

“He strangled her,” lawyer Randall Schwerdorffer told the press, adding that his client's motivation “was not criminal”.

“There were some very strong tensions in their relationship as a couple,” he added. “Alexia had an overwhelming personality, so he felt diminished, stifled. At one point too many words were said, a fit of anger proved too much, and he couldn't control himself.”

That statement from the lawyer prompted anger among many in France not east the The minister for gender equality Marlene Schiappa who responded by saying we must “stop making excuses for domestic violence”.

“This isn't an argument, it's not a personal drama; this is a murder,” Schiappa told French media.

“I think that women who are living in domestic violence situations right now could hear this, and might say to themselves: ‘Maybe I deserve to be hit’, or there might be men who hear it and say, ‘Me too, my wife is overwhelming me, I’m going to hit her’.”

“I think we must stop minimising domestic violence, and stop finding excuses. There is nothing that can justify hitting your wife or partner.,” she said.

Schwerdorffer said Daval maintains that he acted alone — but he added that his client insists he did not set fire to his wife's body.

The murder case shocked the couple's peaceful town, with nearly 10,000 people turning out for a silent march in her memory. Daval, initially questioned as a witness, had told police an argument with his wife turned physical on the day before her disappearance, which he said explained the scratches and bite marks on her hands.

Police arrested Daval on Monday and searched his home after interviewing more than 200 people over the past three months.

Police sources said a neighbour had reported hearing a car leaving the couple's home on the night before Alexia was reported missing — a fact backed up by a tracking device on his work car.

Traces of tyres matching those of his car were also discovered close to where Alexia's body was found, Schwerdorffer said.

A source close to the inquiry also said the body was covered in a sheet that was thought to come from the couple's home.