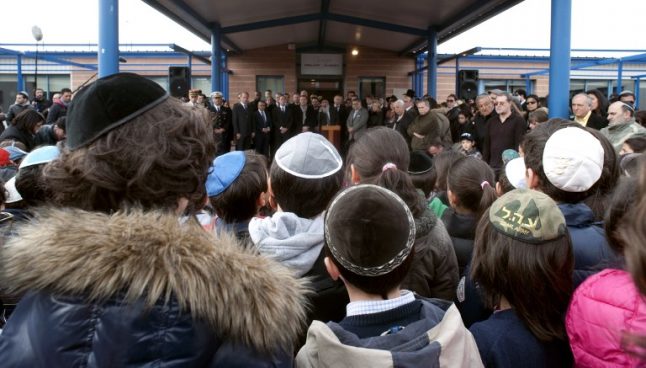 Two teenagers beat the boy up in the northern Paris suburb of Sarcelles on Tuesday, in what prosecutors said appeared to be attack motivated by the child's religion.

It is the latest in a string of assaults that has worried France's large Jewish community, coming three weeks after a kosher supermarket in the Paris suburbs was gutted in a suspected arson attack.

“An eight-year-old boy was attacked today in Sarcelles. Because he was wearing a kippa,” Macron tweeted late Tuesday.

“Every time that a citizen is attacked because of their age, their appearance or their religion, it is an attack on the whole country,” the president added.

“And it's the whole country that must rise up today alongside French Jews to fight with them against these disgusting attacks.”

Prosecutors said the two youths attacked the boy while he was on his way to after-school tutoring on Tuesday, pushing him to the ground and then beating him.

Sarcelles, nicknamed “Little Jerusalem” due to its large Jewish population, was rocked by anti-Jewish violence during the 2014 war in Gaza. Several shops were set on fire or vandalised, including a kosher grocery.

A record 7,900 French Jews emigrated to Israel in 2015 following the deadly jihadist shooting at a Parisian kosher supermarket two days after the attack on satirical magazine Charlie Hebdo.

That exodus has since slowed, but a spate of anti-Semitic attacks since have continued to frighten one of Europe's biggest Jewish communities, numbering an estimated half a million.

A global study in 2014 found that one in three French people held anti-Semitic views, although experts suggested the figure exaggerated the problem of anti-Semitism in France.

“Stating 18 million French people show signs of anti-Semitic attitudes seems excessive to me,” Marc Knobel, head of studies at France's Jewish umbrella organization CRIF told The Local at the time. “I have never seen a figure like that before.”

“I don't doubt that anti-Semitism exists in certain categories of the French population, and there is anti-Semitic violence in France, but France is not an anti-Semitic country,” he said.

READ ALSO: Anti-Semitism in France: Just how bad is it?