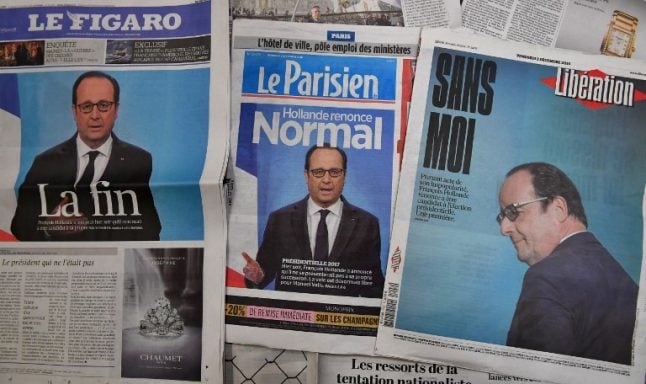 Photo: AFP
There are few issues on which France’s far-right Front National agrees with the radical left-wing journalist Edwy Plenel – former editor of Le Monde and current boss of the crusading investigative website Mediapart.
But one is the question of the enormous amount of money – sometimes topping the billion-euro mark – the French state hands out every year to the country’s newspapers and magazines.
Both the Front National and Plenel staunchly oppose these subsidies, and both have campaigned for them to be stopped.
The Front National sees French media as largely left-wing and viscerally opposed to all its works, even to its very existence.
The party led by Marine Le Pen points to the annual handouts as proof that the media and the government are simply different facades of the same elite establishment that cares more about feathering its own nest than about helping the ordinary man or woman.
Plenel on the other hand argues that if papers like Le Monde and Le Figaro pocket tens of millions every year in government funds, they are likely to be less inclined to do their job of holding the government to account.
More generally he argues that French newspapers and magazines lack independence as they are beholden to powerful interests, since they are mostly owned by men like Serge Dassault, the arms magnate who owns Le Figaro, Patrick Drahi, the telecoms tycoon who owns Libération and news weekly L’Express, or Xavier Niel, the man behind telecoms group Iliad, who is joint proprietor of Le Monde. Plenel proudly points to his own online, subscriber-only publication – which is about to celebrate its tenth birthday – as proof that independent media can survive, and even flourish, without advertising and without being a trinket in the pocket of a powerful tycoon.
He reserves special scorn for the fact that almost every French publication you’ve ever heard of – and many you have most likely not ever heard of – has, as he sees it, its snout stuck firmly in the trough of government subsidies.
“It is what is called ‘clientelism.’ The bulk of these publications which accept these subsidies” are compromised, Plenel said at a recent meeting with journalists from the Anglo-American Press Association of Paris.
Mediapart accepted “less than 200,000 euros” in the first few years of its existence, but then Plenel says he took another tack and campaigned – successfully – for the previously secret figures on government press subsidies to be made public. (Edwy Plenel. AFP)
Before the subsidies were revealed for the first time, in 2013, by the ministry of culture and communication – which hands them out – France's state auditor had lambasted them.
The Cour des Comptes said in a 2013 report that the written press got five billion euros between 2009 and 2011 in handouts that had “not shown their efficiency” and had led to a culture of “dependence” among editors.
State aid to the press goes as far back as the days of the French Revolution and has been reformed many times over the years, but its stated aim has always been to boost democracy by fostering a pluralistic media scene presenting divergent points of view.
This was particularly important in the wake of World War II, when many papers either went under or were tainted by collaboration with the Nazis who occupied France during the conflict.
There is, perhaps unsurprisingly, little if any debate in the French media on whether these subsidies are a good thing, and their annual publication gets little coverage.
Jérôme Fenoglio, the editor of Le Monde, described as “pure denigration” Plenel’s accusation that his newspaper and all the others taking handouts from the state were compromised.
“These subsidies were put in place so that newspapers could be independent, less dependent on economic uncertainties,” he told The Local.
“There is no risk whatsoever that we would be submissive to the state. That is evident every day in the articles we publish that are critical of the current and of previous governments,” said the editor of the centre-left daily that has a staff of 450 journalists.
Fenoglio also rejected the point oft made by the Front National that the state is throwing money at newspapers owned by billionaires, noting that this cash does into go into the pockets of shareholders but helps modernise newspapers or meet part of their running or distribution costs.
The French state, even under its iconoclastic new President Emmanuel Macron, looks set to continue providing generous subsidies to the country’s magazines and newspapers.
The culture and communications ministry is due in February – several months later than originally planned – to hold a press conference to announce the amounts handed out back in 2016. This might generate an article or two, but most likely it will largely go unnoticed.
There have been no hints about much will be announced, but it will certainly be in the hundreds of millions.
In 2013 it was €725 million , €613 million were handed out in in 2014, and for 2015 the subsidies totalled €594,348,614, according to ministry figures given to The Local.
In 2015 the ministry stopped including in its total figures the amount of money paid to La Poste – the national postal service – to cover postage of publications, as it argued that this cash was not a direct subsidy as it was not paid directly to publications.
This new tactic – which also got little coverage in the French press – has the obvious advantage of making press subsidies look smaller than they really are.
Officials said that the amount paid out to La Poste in 2015 was €132.5 million.
By way of comparison, the only state help newspapers and magazines get in Britain is that they are classed as “zero-rated” goods, meaning there is no value-added tax. (French publications benefit from a greatly reduced VAT rate of 2.1 percent.)
There are – currently – no direct subsidies to the written press of the kind found in France.
Roy Greenslade, a media commentator for The Guardian and a former editor of the Daily Mirror, said however that he thinks they could one day arrive there, and that he would welcome this if the necessary safeguards were put in place to protect editorial independence.
“In Britain, our major public service broadcasting service, the BBC, is funded through a state-organised licence fee system. Yet the continual rows between the BBC and governments show that the state does not control its output.
“British provincial and local newspapers are no longer able to report news comprehensively and are now using BBC-funded reporters to do vital work. We are therefore only a step or two away from accepting that the state (meaning, of course, the public, taxpayers) will subsidise journalism.
“In other words, the French model is on its way to Britain,” said Greenslade.