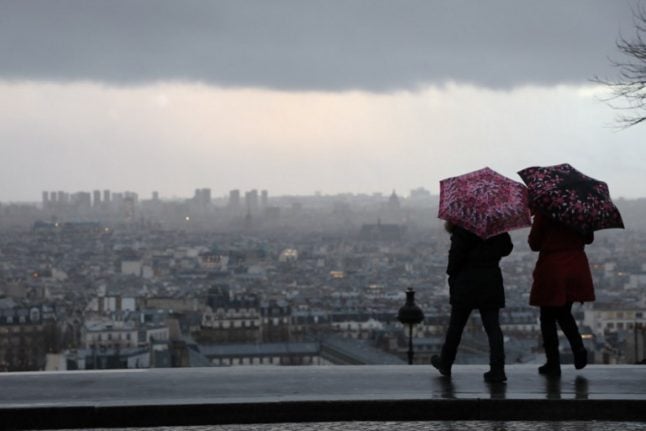 The amount of rainfall to have fallen in France since December 1st is the highest recorded since 1959 – the year when the rain gauge's were set up, Météo France has confirmed.

As a result of all the rain, France has beaten the previous record set back in the winter of 1981/82.

Regions like Auvergne-Rhône-Alpes and Bourgogne-Franche-Comté have seen the most rain ever recorded.

The greater Paris region of Île-de-France, which has seen dramatic floods in recent days as the River Seine burst its banks in Paris saw one of the wettest months ever.

“Several regions have already beaten their own record with twice the normal amount of rainfall” for a month of January said Météo France climatologist Christine Berne. Some 282.5 mm of rain fell on average across the country during the two months.

“Since early December 2017, France has been subjected to a fast ocean flux, leading to many disturbed weather patterns that were often very active,” said Météo France. “These frequent and abundant rains on already wet soils lead to many floods.”

It's not just the rain. This winter in France has been marked by a lack of sun.

France's northern and eastern areas of Hauts-de-France, Champagne, Alsace and Île-de-France have seen less than 40 hours of sunshine since the start of December. In flooded Paris the River Seine peaked Monday at more than four metres above its normal level, heralding a lengthy mop-up job for Parisians
after days of rising waters that have put the soggy city on alert.

The saturated ground in the Paris region means that even though the waters are now set to recede, the clean-up will be slow.

“Lessons need to be learned from this,” said top Paris official Michel Delpuech. “We know this type of phenomenon will happen again.” In all some nine departments in France remained on Orange alert – the second highest – for flooding on Tuesday, including Paris. But more rain is forecast starting Wednesday, according to environment minister Nicolas Hulot, and water levels are expected to stay high for at
least another week.

“Let's not chalk up every event to climate change, but even so, these events are more frequent and more intense… so we're going to have to adapt,” Hulot said as he toured by boat some of the flooded towns southeast of Paris on Monday.

Around 1,500 people have been evacuated from their homes in the greater Paris region, according to police, while 1,900 households have lost electricity.

Tourists have also suffered with the capital's river cruise boats out of service and its pretty riverside walkways deep underwater, though plenty have come to goggle instead at the swollen Seine and snap photographs.

The river did not quite reach the 2016 high of 6.1 metres, when priceless artworks had to be evacuated from the Louvre.

But the world's most visited museum was still on alert, along with the Musee d'Orsay and Orangerie galleries, with the lower level of the Louvre's
Islamic arts wing closed to visitors.