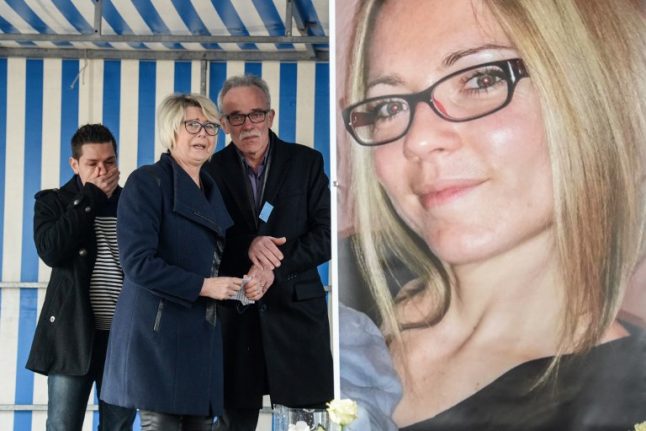 Alexia Daval, 29, was murdered while jogging. Her husband Jonathann (left) was arrested on Monday. AFP

The charred body of Alexia Daval, a 29-year-old bank employee, was found in a wood in October in Esmoulins, in the rural Haute-Saone area to the northeast of France's Burgundy wine-growing area.

She had been beaten and probably strangled, prosecutors said, before her killer set fire to her body and hid it under tree branches a few kilometres (miles) from her usual jogging route.

Her husband Jonathann, 34, said (pictured above left and below in the centre) at the time that his wife had gone out running and never came back.

Local prosecutor Edwige Roux-Morizot told AFP that police had detained Jonathann Daval at his home in Gray on Monday morning and taken him into custody. Officers were also carrying out a search of their home.

Daval, initially questioned as a witness, had told police he argued with his wife on the day before her disappearance, which he said explained why she
had scratches and bite marks on her hands.

Sources close to the investigation told BFM TV that police were working on the theory that a domestic dispute may have led to the murder.

The sources said the couple had had difficulty conceiving a child which had prompted real tension between the pair. The case shocked the sleepy bucolic community where the couple live, with nearly 10,000 people turning out in their town of Gray for a silent march in her memory in November.

In November hundreds of people organised group running excursions across the country in tribute to the murdered young woman.

“With these sporting gestures, you are making Alexia into a strong symbol, one of the freedom for all women to enjoy running and to live,” her mother Isabelle Fouillot said through tears as she addressed the rally on Sunday.

Many of the 8,000 to 10,000 people who joined the march and listened to speeches from Daval's husband Jonathann and family brought white roses which were placed in front of her parents' tobacco shop in the town.

The husband has previously “denied any link to the murder of his wife”, according to his lawyer.

“The last time that I saw him, he confirmed to me that he was not in any way linked to the murder of his wife,” said Randall Schwerdorffer on Monday.

The lawyer had not spoken with his client since his arrest.

The local French prosecutor is expected to hold a press conference later on Monday to explain the arrest of the husband.