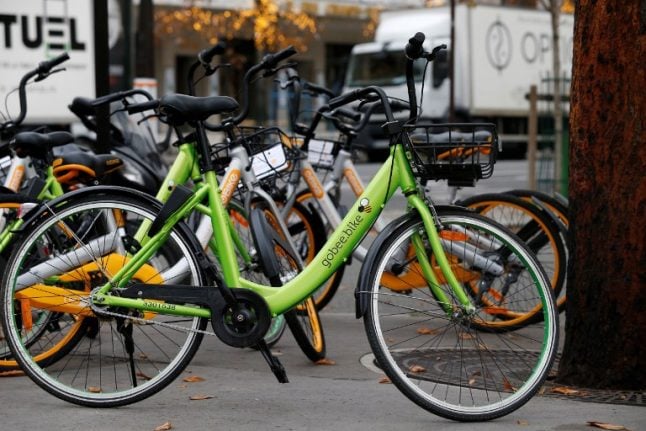 In case you've not noticed, there's been an influx of hire bikes in Paris recently.

The so-called “floating bikes”, which can be left by the user anywhere they want, have been appearing at seemingly every corner of the city.

First it was Chinese firms GoBee and Ofo, followed by Singapore-based oBike. And now a fourth player has joined the game – Chinese firm Mobike, which started rolling out its own orange fleet on Wednesday in Paris.

Mobike started with around 1,000 bikes, but has plans to release “several tens of thousands” in the near future, reported L'Express newspaper.

In case you've never heard of the concept, the rough idea is that members can find the bikes using a geo-locating mobile phone app, then can rent them out for around 50 centimes per half hour. And the best part of it all, some say, is that users don't have to find a special stand to leave the bike at the end of the journey – they can simply leave them wherever they want.

But herein lies one of the biggest problems with the bikes. Namely, they just get abandoned all over the place. Anyone who has walked the streets of Paris can attest that they've had to step over or walk around a bike that's essentially been dumped on a sidewalk. Or a road. Or left in the middle of a parking place.

Don't believe us? Take a look through some of these recent pics from out and about in Paris:

And of course, there's nothing to stop vandals from picking up the bikes and throwing them in the canals and rivers, seeming they're not locked up (the bikes, not the vandals).

So, while these bikes may indeed be an environmentally friendly transport option, are they really the best option for this city? Or should City Hall officials push for some kind of locking stand rule for all, similar to the Velib system that's currently undergoing a major facelift?

What's your take on the situation? Leave your thoughts in the comments below.