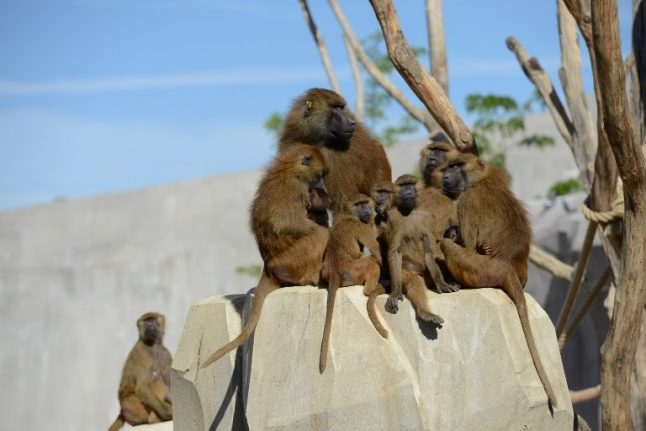 A picture of the baboons from the Paris zoo, taken in 2015. Photo: AFP

All the primates have been returned to their pens with the exception of “an elderly female, a young female and a baby”, said Sophie Ferreira-Le Morvan, the deputy head of the National Museum of Natural History.

They remain in the area of the “grand rocher”, a landmark central mountain inaccessible to the public at the Paris zoological park in the Vincennes area of the French capital.

The three baboons are “under surveillance”, Ferreira-Le Morvan said, and the zoo will not reopen until they are captured.

The breakout was first noticed by a zoo worker, who saw the primates gathering in a service corridor used by personnel late Friday morning.

Safety procedures were “immediately” triggered, the zoo said in a statement, with a total of 60 firefighters, 20 police and all of the zoo's staff mobilised to capture the animals.

None of the baboons reached public areas and the evacuation was ordered as a precaution, the zoo said.

It remains unclear how the baboons got loose.

Initial reports suggested 50 baboons had escaped, although a zoo spokesperson told The Local that the number was only four.

“The four that escaped are currently in the wooded area of the park,” he said on Friday, adding that the zoo had been evacuated.

He added that none had left the zoo.

Police were quick to the scene, with several photos tweeted from the zoo showing police officers surrounding the zoo.

Nearby roads were reportedly closed off temporarily.

The zoo, often referred to as the Vincennes Zoo, is located on the edge of the Bois de Vincennes on the south eastern edge of Paris.