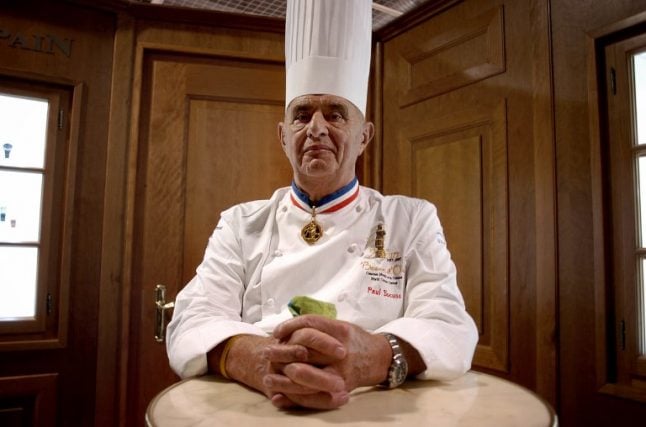 “Monsieur Paul”, known as much for his culinary flair as for his love of hearty traditional fare, would probably have preferred a simple ceremony at the small church in the village of Collonges-au-Mont-d'Or.

But “that was not possible” given the huge crowd expected, his son Jerome said.

The ceremony will be held instead at Lyon's Saint Jean Cathedral, with two giant screens installed outside for the expected spillover crowd.

Bocuse's casket will be borne by cooks wearing their chef whites.

Among the chefs expected to attend are Alain Ducasse, whom Bocuse considered his spiritual “son”; the Troisgros brothers; Anne-Sophie Pic and Yannick Alleno.

American Thomas Keller as well as Daniel Boulud, based in New York, are coming, as is Hiroyuki Hiramatsu, who heads the Bocuse brasseries in Japan.

The government will be represented by Gerard Collomb, the interior minister who is a former mayor of Lyon.

Bocuse helped shake up the food world in the 1970s with the Nouvelle Cuisine revolution, sweeping away the rich and heavy sauces of yesteryear in favour of super-fresh ingredients, sleek aesthetics and innovation.

He routinely did his own shopping at the Lyon market, inspecting the produce available and then planning his dishes for the day.

In doing so, he also helped usher in the era of the celebrity chef.

“He was one of the greatest figures of French gastronomy, the General Charles de Gaulle of cuisine,” said French food critic Francois Simon.

The heart of his empire, L'Auberge de Collonges-au-Mont-d'Or, his father's village inn near Lyon in food-obsessed southeastern France, earned three Michelin stars in 1965, and never lost a single one — a singular achievement.

Bocuse, who had had Parkinson's disease for several years, died in the room above the restaurant, the same one in which he was born.

“Good cooking for me is when you lift up the lid and it smells delicious, and you reach for a second helping,” Bocuse wrote a few years before his illness struck.

A staunch upholder of tradition as well as an innovator, he kept several of his trademark dishes at the Auberge unchanged for decades, including the black truffle soup he created for French president Valery Giscard d'Estaing in 1975.

His status as the giant of haute cuisine owed as much to his showmanship and business sense as it did to his culinary genius.

“His cuisine was built around the classic French repertoire,” said Simon. “But people came for the emotion, for his banter, his sense of humour.”

Born into a family of cooks since 1765, Bocuse began his apprenticeship at the age of 16 and came to epitomise a certain type of French epicurean — a lover of fine wine, food and women.

“I don't regret anything in my life,” Bocuse once said, “except perhaps the pain I may have caused the women in my life. I hope they will forgive me.”