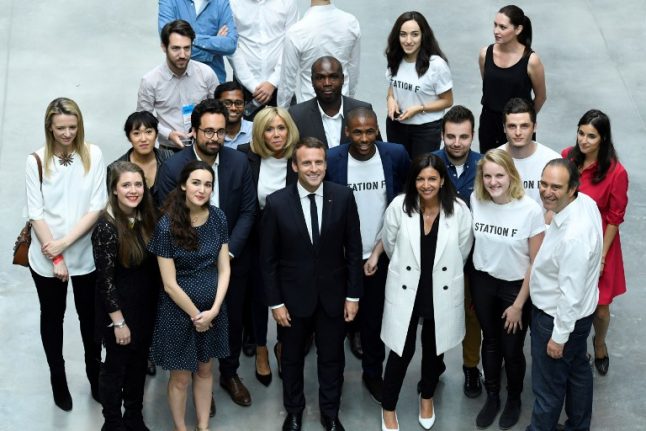 Macron with young entrepreneurs and tech billionaire Xavier Niel (bottom right). Photo: AFP
“He has given France a pro-startup, pro-entrepreneur image abroad that we did not really have before,” said Niel, who bankrolled a giant startup incubator on the banks of the Seine river in Paris that opened a month after Macron's election last year.
Speaking to a group of foreign correspondents at Station F  — the world's biggest incubator which is nourishing 1,000 startups — Niel praised Macron's reform of the labour code and of wealth and investment taxes.
But his most important achievement to date has been to change France's image as being a place that is unfriendly to business, said 50-year-old Niel, a serial entrepreneur nicknamed the “French Steve Jobs”.
“France has not changed… What really changed is the fact of having a young, dynamic president, who is not from any political party,” he said.
On Wednesday, Macron took his pledge of a French renaissance to the world's business elite gathered in the Swiss resort of Davos.
READ ALSO: “France is back at the core of Europe,” said the 40-year-old former investment banker, who has been hailed as a potential saviour of a liberal post-war order under threat from Donald Trump's America and Britain's decision to leave the EU.
Trump, Brexit boost
Niel, vice-president of Iliad which owns France's second-biggest mobile phone operator, said Trump's nativist policies and climate change denialism had contributed to France's growing appeal as a place to start a business.
“England maybe does not appear very stable under Theresa May, Germany doesn't maybe seem much fun with a leader who is starting to get on in years and the United States under Donald Trump doesn't seem very welcoming to strangers,” he said. “In the midst of all that, we're doing quite nicely.”
Station F manager Roxanne Varza said the incubator, which Niel paid for with 250 million euros of his own money, received more applications from US and UK start-ups last year than any other country.
Niel singled out Macron's introduction of a flat tax rate of 30 percent on capital gains and dividends as one of the most significant reforms for companies looking to invest in new technology companies.
But much of what is drawing tech firms to Paris predates Macron.
It was Macron's predecessor Francois Hollande who set up new visas for digital entrepreneurs.
In its 2017 State of European Tech report the investment firm Atomico noted that Britain remained the biggest recipient of venture capital funding at $5.4 billion (4.4 billion euros) — more than double that of France.
But it was France that closed the most deals.