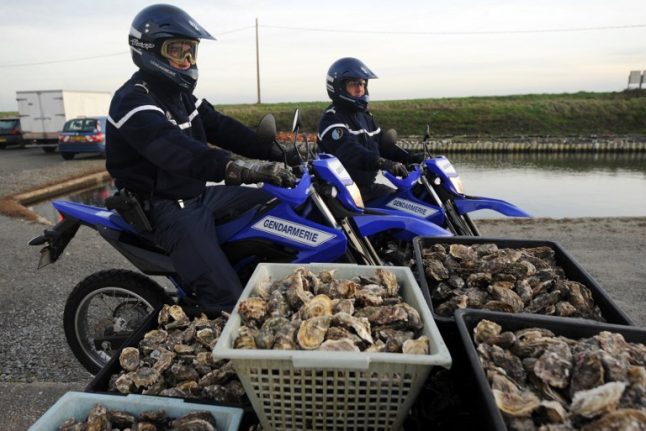 Police on motorbikes patrolling an oyster farm in western France. Photo: AFP
Criminals in France have long held an unhealthy appetite for some of the country's famed delicacies and products.
Indeed in December last year, 800 kilos of oysters stolen from sea farm in western France, a common occurrence during the end of year festivities as the delicacy is a staple for Christmas and New Year's dinners in French homes and restaurants.
The theft caused an estimated loss of a whopping €35,000.
Fine French wines have also been on thieves' shopping lists.
In August, a band of resourceful thieves used the Paris catacombs to reach a wine cellar, before making off with more than €250,000's worth of top quality alcohol.
In August 2014 French police targeted a gang of robbers on Monday who had helped themselves to €1 million worth of cases of high-end Bordeaux wine from vineyards in south-western France and only last year thieves stole seven tonnes of grapes from Bordeaux vineyards.
And then there's the cheese heists.
In 2015, The Local reported on another incident when four tonnes (100 wheels) of Comté cheese was stolen by thieves in the east of the country. Estimates at the time said the loot was worth anything from €40,000 upwards. Wheels of Comté cheese. Photo: Joi Ito/Flickr
And in December 2017 nearly 700 blocks of fine Saint-Nectaire cheese were stolen from producer Caroline Borrel.
The cheese heist took place under the cover of night while the cheeses were being stored in the “rue des Caves” (Cellar Street) — the nickname of the street where a large number of cheese producers age their product — causing around €10,000 worth of losses to Borrel.
“The thefts have been increasing over the years: there are more and more of them and they've never been stealing as much as they are now,” Borrel told The Local.
“Good farm products are in vogue. Food produced on farms is sought after and on top of that reselling has become increasingly easy because it's so hard to track it down in the markets.”
Thieves arrive organised and well-prepared with tools to help them make off with as much loot as they can get their hands on.
“The thieves use brutal methods: ripping off iron doors, cheeses are knocked over… some cheeses have even fallen on the ground. My neighbors were robbed one year ago and the locks had been removed [from the doors] so they were well-equipped.”
“We'll strengthen the security (put in alarms and cameras) and we will have to review our insurance policies because I don't think they will stop!” Photo: AFP
According to the most recent official statistics, there were more than 10,000 thefts reported from French farms in 2013, which represents a 66 percent increase in six years.
Luc Smessaert who is on the administrative council of France's leading farmers union, the FNSEA told The Local that there was still more work to be done by the local gendarmerie and police to protect French producers and farmers.
“It's already a difficult time for them [farmers and producers], many of whom are struggling to make ends meet,” he said. “Wine, oysters, cheese…these are all highly valuable products.
“Thieves need to remember that there are people working on these farms that need to live. It shows a complete lack of respect for what they do.”
Tackling the problem
In response to increasing pressure, in 2014 the French government introduced new measures to tackle the problem.
The Agri Vigilance scheme introduced by the government with support from farmers unions and the police attempts to tackle the issue of thefts of valuable products and includes real time SMS warnings about thefts going on in the area.
There are now regular police patrols at farms — even resorting to using night vision goggles when necessary — before and during harvest season. A police officer conducts a patrol by canoe of oyster beds in La Tremblade, southwestern France. Photo: AFP
In Champagne, police carry out horseback patrols particularly during harvest season and Christmas, in order to prevent thieves targeting the precious grapes.
And some local police forces like one in the Charente-Maritime area of southwestern France, have gone even further, carrying out patrols on kayaks day and night at oyster farms and using drones.
“The area we patrol is so vast that we don’t necessarily know to whom each farm belongs to,” Police Squadron Leader Christophe Laferriere told NBC, adding that thanks to the flying device, they can take pictures of boats’ registration numbers.
Farmers union rep Smessaert told The Local: “Over the past two or three years the police have been taking the problem more seriously but they need to be better prepared because thieves are organised and equipped with new technologies.” The 'spy oyster' by Flex Sense. Photo: AFP
“We're not here to do their job.”
And the police aren't the only ones trying to combat the problem.
French start-up Flex Sense has even created a spy oyster device, which is hidden in the water among the real oysters and is able to send an SMS to the farmer when it's moved.
But while technology is a handy weapon for producers it doesn't seem enough to stop the determined food thieves.