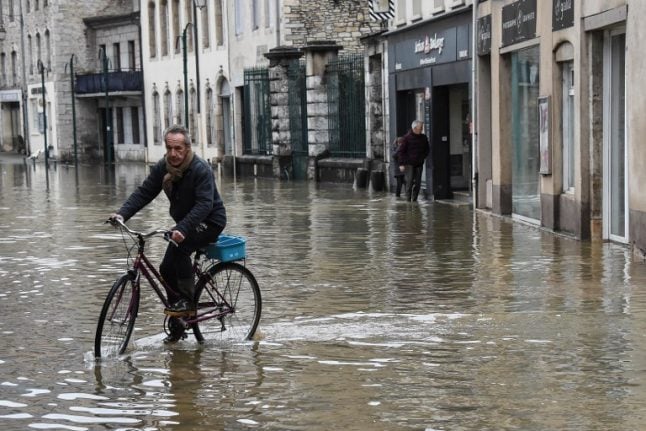 Ornans in eastern France. Photo: AFP
In total 23 departments were on orange alert — the second highest warning — due to the continuing flood risk in their area according to national weather agency Meteo France.
Orange is the second highest alert and when in place people are advised “to be very vigilant” due to the danger. The public are advised to stay away from the water's edge.
The departments at risk are: Eure, Seine-Maritime, Yvelines, Paris and the area immediately outside the city known as the “Petite Couronne”, Val d'Oise, Oise, Seine-et-Marne, Aube, Yonne, Nievre, Haute-Marne, Meuse, Vosges, Haute-Saone, Doubs, Jura, Loire, Rhone, Isere and Lot-et-Garonne.
“Rainfall is expected to accumulate until Wednesday evening, so the ongoing floods will continue to spread over the next few days, generating significant overflows on many rivers in the north and east of the country,” announced the environment ministry's Vigicrues flood watch website in its last bulletin published Wednesday morning.
And it doesn't look like the end is in sight for the moment, with the website adding that more rain is expected across the country on Thursday. Photo: Meteo France
River levels including the Seine in Paris have been rising quickly in recent days.
The river, which has already burst its banks, is expected to continue to rise until Friday when it is set to peak at 6.10 metres –  a peak last reached in 2016 when floods sent riverside museums scrambling to move artworks from their basements, which was the highest level since 1982.
As a result the city's RER C line has been suspended in central Paris until at least Friday, depriving commuters of one of the French capital's major train routes.
Metro lines have also been impacted due to rising water levels.
On Tuesday the City Hall set up a crisis cell to organise emergency efforts while all river traffic was suspended and a major train line will be suspended from Wednesday. A car runs on the flooded banks of River Seine. Photo: AFP
Meanwhile in the eastern department of Jura, school transport has been cancelled in 12 villages due to extreme floods in the area.
Jura and Doubs in eastern France were on red alert for flood risk on Monday although that was lowered to orange on Tuesday.
Local authorities confirmed that the waters are receding “slowly” even though the water levels are still very high.
In Strasbourg, regional authorities announced they were opening an emergency containment zone to stop the Rhine overflowing after days of snow and heavy downpours.
The 600-hectare polder at Erstein near the German border was evacuated Monday and can take in up to 7.8 million cubic metres of water diverted from the massive river, authorities said.
Further along the border, the medieval Swiss town of St Ursanne has been transformed into a lake, images on RTS television showed, while several mountain train lines have been halted.
A mudslide caused a Swiss regional train in Solothurn to derail late Monday, although there were no injuries.
French flood agency Vigicrues warned people on the risk of power cuts, saying “even areas that rarely flood” could be inundated.
In the eastern town of Ornans, home to 4,000 people, the high street was flooded and the ground floor of the town hall underwater.
“We haven't seen a flood like this since 2002,” mayor Sylvain Ducret told AFP.