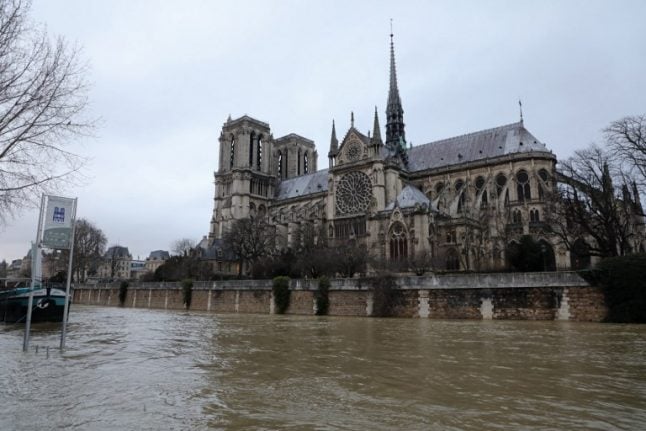 The River Seine had reached 5 metres by Tuesday evening – some 3 to 4 metres higher than the normal level of the river forcing City Hall to open a crisis cell as authorities look to respond to the rising waters.

The peak of the flood now looks set to be reached on Saturday – depending on the weather of course – when the river could reach 6.2 metres, slightly higher than the major flood of 2016. The main impact of the flood on daily life in the capital was the closure of the central section of the RER C train line.

National train operator SNCF said the central part of the capital's busy suburban line C, which runs along the left bank of the river, would be closed “in order to guarantee the safety of the passengers and facilities”.

Seven stations — including several that serve tourist attractions such as Notre Dame cathedral and the Musee d'Orsay — will be shut until at least Friday. Users on the Paris Metro line 7 also reported delays with the train drivers blaming flooding. But for Paris transport authorities to activate their emergency plan, which could see them closing off and bricking up Metro stations, the river would have to reach 6.6 metres.

All river traffic has been suspended as boats are unable to pass under the bridges.

While the situation is nothing like the feared 'flood of the century' which last occurred back in 1910 and really did leave Paris under water, authorities are nevertheless taking it very seriously.

Access to the flooded roads and paths along the Seine are closed off to prevent curious members of the public getting too close to the fast flowing river and businesses and residents along the Seine who are at risk have been alerted and made aware of the emergency measures that will be taken if waters rise too high.

Famous Paris museums the Louvre and the Quai d'Orsay, which stand on the banks of the Seine are set to activate their emergency plan, which, just as in 2016, will see artworks moved to safe areas of the galleries.

The Louvre, which was forced to close for three days during the flood of 2016, has some 150,000 located in areas of the museum at risk of flooding.

The museum says it will activate its emergency plan when the water level reaches 5.08 metres, which it should have done by Wednesday morning.

Later on Wednesday the museum issued a statement saying “due to the high level of the river Seine, the lower level of the Department of Islamic Art is closed to the public.”

The statement added: “Protective measures for the Palace have also been taken. The Crisis management team, led by the Louvre’s General Management, is actively monitoring the situation and will implement all necessary measures to protect against all potential risks.”

Due to the high level of the river Seine, the lower level of the Department of Islamic Art is closed to the public. We apologize for any inconvenience caused. Please find more here: https://t.co/BbgK6Z7LBR #ParisFlood pic.twitter.com/WNZsu4nyuP According to authorities there has been five times more rain in January in the greater Paris region of Ile-de-France than is normal for the first month of the year.

“The situation is serious but there's no reason to be over anxious,” said French junior minister Brune Poirson.

Paris will no doubt fair better than many of the smaller towns and villages in the region which are already under water. Parts of Villeneuve-Saint-Georges in the Val-de-Marne are already submerged. The floods of 2016 which were devastating for towns to the south east of Paris caused some €1.4 billion worth of damage.