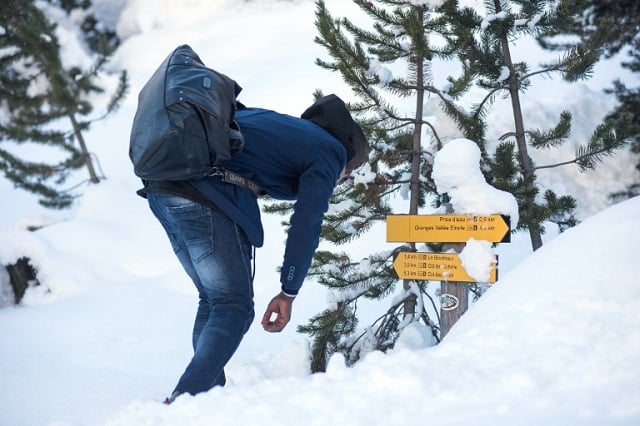 A migrant pauses to check signs on the way from Italy to France. All photos: Piero Cruciati/AFP

They are among hundreds of migrants trying their luck in Bardonecchia. The town is a skiers' delight, but beyond the black run thrills and hot toddies lie the tracks of those braving dangerous snowy peaks to cross the border.

After a crackdown at the Ventimiglia coastal crossing, young men have begun arriving at the railway station here to attempt the Col de l'Echelle pass, which runs 16 kilometres (ten miles) between Bardonecchia and the first French town.

While controls along this route are strict in the summer months, it is closed to traffic in winter and rather than zealous police the biggest challenge facing the mainly African men is a freezing wind that buffets the1,700 metre (5,600 feet) high pass. Migrants from the Ivory Coast cross a snow-covered pass.

“Word has been spreading among migrants for several months. But it's extremely dangerous. The arrivals have become a daily tragedy!” said local teacher Silvia Massara, who helps distribute hot meals to those passing through.

Inside the station, tired youths wolf down plates of stew and rice handed out by volunteers from the Rainbow for Africa and Briser les Frontieres associations, as well as the Red Cross.

Those lucky enough to make it to the French side without getting caught are welcomed by locals offering warm hearths and hearts. The Italians, meanwhile, do everything possible to convince the migrants to turn back before it is too late.

After surviving baking deserts, detention in Libyan prisons and perilous boat crossings in the Mediterranean, the migrants are shown pictures by volunteers of avalanches or fellow travellers who have lost limbs to frostbite. Many shrug off the danger. “We have nothing to lose. No job, no money, we are ready to take any necessary risk to cross the border,” said one young Guinean, who wanted to remain anonymous.

Cyrille Coulibaly, a 20-year-old from Ivory Coast who recently arrived in Italy, had set off before dawn the day before, but quickly turned back, shivering violently in his lightweight clothing. However he refuses to be discouraged.

“I was advised to take this route. It's all planned. I just need to find some shoes,” he told AFP.
Others, like 29-year-old Mohamed Bambore from Burkina Faso, throw in the towel before even setting out.

“I'm not going to do it. It's dangerous, you could lose a foot (to frostbite),” he said. French tourists offer food and water to migrants walking in the snow.

Instead he will wait in Italy for his residence permit to be renewed before looking for another way into France. Cisse and Ibrahim, struggling through snow up to their knees, their jeans soaked through, also turn back.

Dash in the dark

Catching a train would certainly be the easiest way: Bardonecchia is the last Italian stop on the Milan to Paris service, which runs four times a day. As night falls, the migrants put off by the mountain stare at the timetable, planning to sneak on at the next chance.

But reality catches up with them quickly, with seven or eight French border police officers on each train.

“The train is full, get the next bus,” a conductor tells two young migrants, signalling for them to leave the station. The whistle blows, the doors close and the train leaves — almost empty. Most of those who do make it across, by train or on foot, eventually find themselves in a white French police van which serves as a shuttle bus from six in the morning until midnight, returning them to Bardonecchia.

There are warm clothes and hot tea waiting for them at the station, where a little room has been transformed into a dormitory, in which exhausted travellers can bed down for the night under the supervision of a volunteer medic. Dawn brings fresh snowfall and new migrants, who determinedly zip up jackets, wrap scarves around their heads and brace for the climb up the menacing slopes.