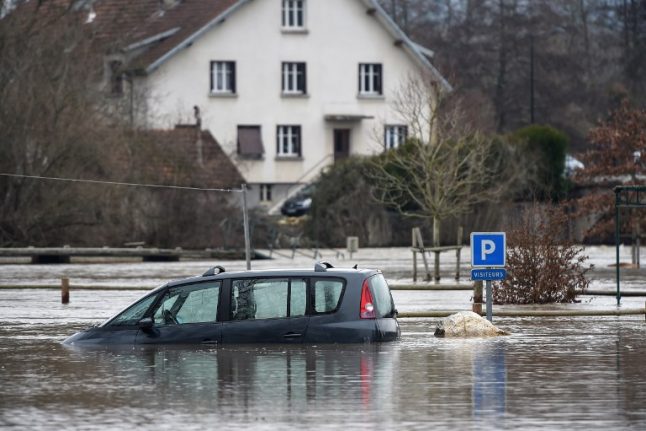 Illustration pic. Photo: AFP
On Tuesday morning 30 departments across France were placed on orange alert for floods by France's national weather agency Meteo France.
Orange is the second highest alert and when in place people are advised “to be very vigilant” because of the risk of dangerous weather.
In addition to Paris, Normandy, the south west and swathes of the east are the most affected areas.
The departments on alert are: Ain, Rhone, Doubs, Isère, Jura, Savoy, Charente, Charente-Maritime, Dordogne, Gironde, Lot-et-Garonne, Nièvre, Yonne, Seine-et-Marne, Paris and the area immediately outside the city known as the “Petite Couronne”, Haute-Marne, Yvelines, Val-d'Oise, Oise and the departments Normandy (except the Channel), Meuse, Vosges, Haute-Saone and Meurthe-et-Moselle.
READ ALSO: Map: Meteo France
Doubs and Jura were lowered from red alert (the highest warning) on Tuesday morning.
On France's border with Germany, officials were preparing to divert the Rhine into a 600-hectare (1480-acre) flooding containment zone if necessary,
with potential snow melt adding to the risk of flooding.
Officials were warning the flooding could also prompt power outages, while several dikes were also said to be at risk of failing.
In the town of Ornans in eastern France, a siren Monday morning warned residents of the rapidly rising Loue river.
“The main street is flooded, and the ground floor at city hall is underwater — we haven't seen such flooding since 2002,” the town's mayor, Sylvain Ducret, told AFP.
Rescue workers in the region were being kept busy, mainly to ensure people didn't drive on flooded roads and help people whose homes had flooded.
In the nearby department of Meurthe-et-Moselle on the border with Luxembourg, rescue services said the damage had been minor so far.
“The rivers aren't rising quickly but steadily after the continued rain these past few days,” the CODIS emergency operations centre for the department said.
“Nothing dramatic, for now,” it added.
About 50 people in the coastal Normandy town of La-Riviere-Saint-Sauveur (population 1,500) were evacuated because of the flooding risks, while overflowing rivers had cut off about a dozen roads near Pont-L'Eveque.
In Paris, the River Seine has already burst its banks and the public have been warned to keep away as the level continues to rise. The quays along the river have been closed until further notice.
The level of the river Seine in Paris rose from 4.57 metres on Monday to 4.82 metres by Tuesday morning and is expected to keep rising until Wednesday when it could reach 5.7 metres, almost four metres about its normal level of 2 metres.
Naturally people have taken to Twitter to post photos and videos of the flooding in their area.
The tweet below shows flooding in the Eure department in Normandy.

And below one Twitter user posted an amazing before and after shot of the Alsace village of Ebermunster in eastern France, which has experienced severe floods in recent days.

In the village of Ornans in the eastern Doubs department people were also contending with floods (see tweets below).

Meanwhile in Jura in eastern France the floodwaters were also rising.

And floods are not the only extreme weather France has been experiencing. On Monday more than 100 chalets in Chamonix, one of France's best known ski resorts near Mont Blanc, were evacuated Monday and hundreds of people were told to stay indoors because of avalanche risks.