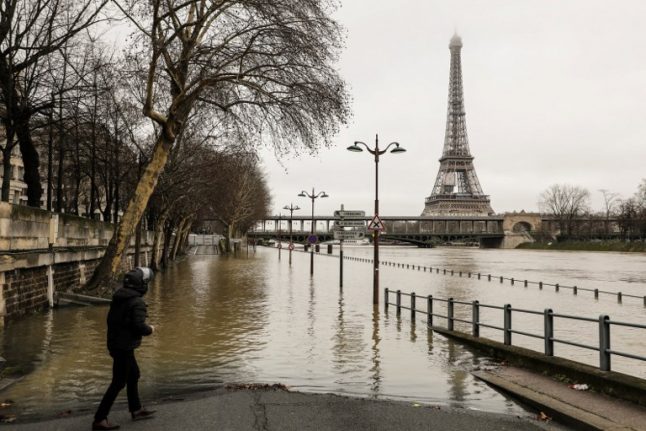 The rising river Seine is starting to impact on life in the capital. On Tuesday the City Hall set up a crisis cell to organise emergency efforts while all river traffic was suspended and a major train line will be suspended from Wednesday. Transport authorities in Paris announced on Tuesday that from Wednesday the RER C train line will be split into two sections.

The central section of the line which runs along the flooded River Seine from west to east will be suspended. So the stops Saint-Michel-Notre-Dame, Musée d'Orsay, Invalides, Champ de Mars, Avenue du President Kennedy and Boulainvilliers will be closed. While it's stopped raining in Paris, the level of the River Seine is expected to continue to rise until Friday when it is set to peak at 6.10 metres –  a peak last reached in 2016 when floods sent riverside museums scrambling to move artworks from their basements, which was the highest level since 1982.

The height of the Seine is measured not from the riverbed but from a point located at the Austerlitz bridge – but 6.10 metres is three to four times the normal level of around two metres.

When the river rose that year, the tracks of the RER C line was flooded. On Tuesday morning the river was at around 4.9 metres and will reach 5.7 metres by Wednesday.

“The Seine in Paris is continuing to rise and we expect it to peak at the Pont d'Austerlitz (where measurements are taken) during the day on Friday,” said flood forecaster Jean-Marc Dolmiere.

Meanwhile City Hall in Paris has warned Parisians to be “extremely vigilant” when near the edge of the river.

The submerged river banks have been closed off as has the Tuileries tunnel and the highway between Pont de Gargliano and Pont de Bir-Hakeim.

Gardens close to the river have also been closed as they are submerged in flood waters.

Barges on the river have been evacuated and the moorings strengthened. A statement from City Hall read: “The City of Paris calls for vigilance. It is strongly recommended not to go near the banks of the Seine, especially on foot, because of strong currents.

“Parisians are advised not to store valuables in cellars and basements, which could be damaged by rising water tables.”

The flood is due to days of downpours further up stream, with the flooded Marne, Yonne and Armançon rivers helping swell the waters of the Seine.

“The accumulation of rainfall is remarkable,” said the weather channel Chaine Méteo. “Last week, the equivalent of two weeks of rain fell in the basin that feeds the Seine and its tributaries.”

Paris is officially on orange alert due to the floods as are the surrounding departments of Val d'Oise, Yvelines and Seine-et-Marne. That is the second highest warning level meaning the public are advised to be vigilant and avoid the edge of the water.

The level of the River Marne is also worrying authorities as it continues to rise on Tuesday.

READ ALSO: What Paris looked like during the 1910 'flood of the century'