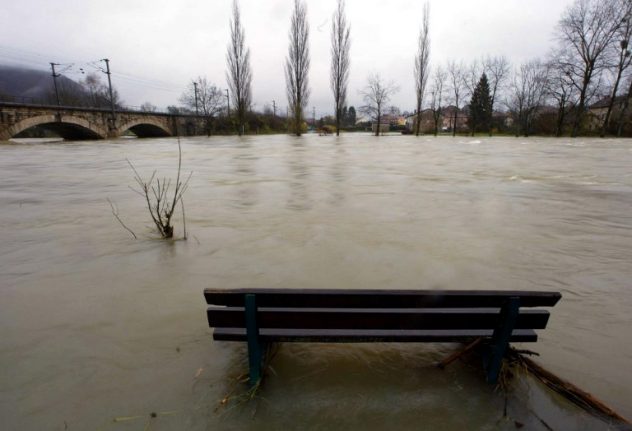 In all, some 29 departments in various parts of France were place on orange alert by Météo France on Monday morning for the risk of flooding, downpours and avalanches.

But in eastern France the Doubs and Jura were placed on red alert – the highest level of warning – for dangerous flooding. Météo France advised residents to remain in doors and avoid all unnecessary travel. If people have to make a journey they must take all necessary precautions and follow any road diversions that have been put in place,” Météo France says.

The warning is due to the river Loue, which runs through both departments, having burst its banks.

The map below shows the other areas of France on orange – the second highest warning level – for flooding, which include Normandy as well as Paris and the surrounding Île de France region.

Swathes of south west and north eastern France were also on flood warnings as downpours continued throughout Monday across much of the country. In Chamonix, one of France's best known Alpine ski resorts, more than 100 chalets near Mont Blanc were evacuated Monday and hundreds of people were told to stay indoors because of avalanche risks.

In those areas at risk from downpours and flooding the public are advised to take precaution when travelling. Avoid the edges of rivers and not to risk driving cars through flooded roads.

Flood warnings are expected to remain in place throughout the day.

In Paris the public were warned to keep away from the river banks as the level of the Seine continued to rise. The quays along the river have been closed until further notice.