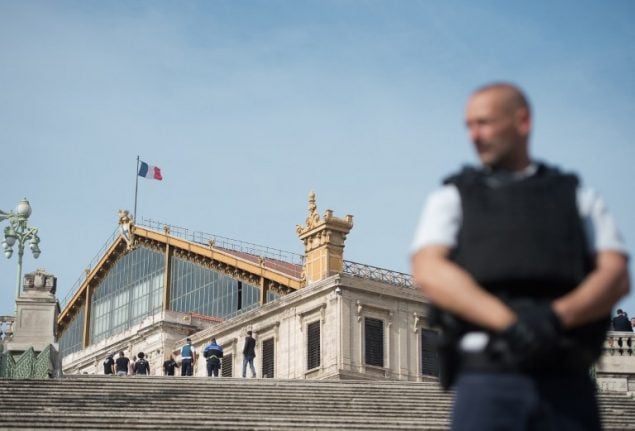 Isis claimed two terror attacks in France last year, including two knife deaths outside the Saint-Charles police station in Marseille in October. PHOTO: BERTRAND LANGLOIS / AFP
The man, who was not known to police, was arrested near the southern city of Nimes on Tuesday. Bomb making materials were found in his house but there was no indication of the targets he was planning to attack, they said.
“This is the first attack foiled this year,” a source close to the investigation told AFP.
The man was charged with “associating with terrorist criminals” and placed in custody.
“The investigation started when police saw on social media a attempt by a man in the Nimes region with Islamist leanings trying to procure a weapon,” the source close to the investigation said.
The raid on the man's house yielded a tube filled with powder which could likely be used as an explosive, different powders and a device to start a fire, the source said.
Several videos taken last year were seized including one in which the man pledges allegiance to self-proclaimed Isis “caliph” Abu Bakr al-Baghdadi with the organisation's black flag in the background.
Isis claimed two attacks in France last year — the April 20 shooting of a policeman on Paris's emblematic Champs Elysees and an October 1 attack in Marseilles's railway station that killed two people.
Jihadist attacks have claimed 241 lives in France since the start of 2015.