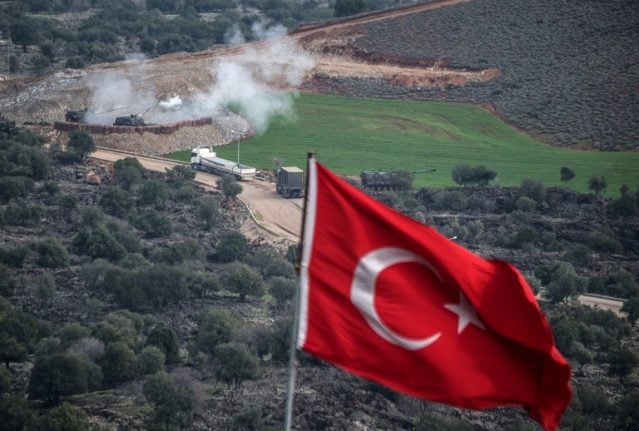 Turkish artillerys shell YPG positions near the Syrian border on Saturday. PHOTO: BULENT KILIC / AFP
“This fighting… must stop,” Parly told France 3 television, adding that the Turkish offensive could “deter Kurdish forces who are at the side” of the international coalition battling jihadists in Syria.
Her comments came as Turkish ground troops entered northern Syria on Sunday to push an offensive against the Kurdish Peoples' Protection Units (YPG), which Ankara considers a terror group. But Parly said the Kurdish militants had been a crucial ally in fighting extremists such as the Islamic State group.
“Our priority is the fight against terrorism,” Parly said. “As a result, anything that could deter the fighters of this battle is a bad thing.”
She added: “What is essential is the fight against terrorism and all this fighting, notably that which is taking place in a terrible fashion near Idlib and elsewhere, must stop.”
The Turkish campaign risks further increasing tensions with Nato allies including the United States, which has supported the YPG in the fight against Isis jihadists.
Operation “Olive Branch”, in the Afrin region, is Turkey's second major incursion into Syria during the seven-year civil war. The army said Isis was also being targeted in this operation although it no longer has any major presence in the Afrin area.
President Recep Tayyip Erdogan had repeatedly vowed that Turkey would root out the “nests of terror” in Syria of the YPG, which Ankara accuses of being the Syrian offshoot of the Kurdistan Workers' Party (PKK).
The PKK, which has waged a rebellion in the Turkish southeast for more than three decades, is regarded as a terror group not just by Ankara but also its Western allies.