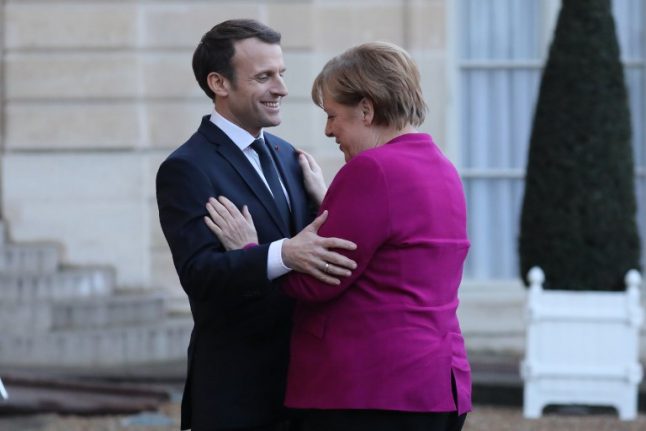 French president Emmanuel Macron welcomes German Chancellor Angela Merkel at the Elysee Palace in Paris on Friday. PHOTO: LUDOVIC MARIN / AFP
“Our ambition cannot come to fruition alone,” Macron told a joint press conference with Merkel before talks in Paris. “It needs to come together with Germany's ambition.”
Merkel's immediate focus is domestic, with her political future on the line after more than 12 years in power. On Sunday, some 600 delegates from Germany's Social Democrat (SPD) party will be asked to give the green light to a preliminary coalition agreement reached with her conservatives last week.
“I am confident of the path ahead and I believe that at the SPD congress many will be open to the coalition negotiations,” Merkel told reporters in Paris. “But the decision is for the Social Democrats in Germany alone.”
'Ambitions for Europe'
At Merkel's meeting with Macron, which appeared aimed at giving her a boost, the German leader said that a “stable German government” was crucial for the EU to move forward with its reform agenda.
In November, she was left considerably weakened after her first attempt to form a new coalition government collapsed when the pro-business FDP party walked out. She then turned to the SPD, her outgoing governing partners with whom she hopes to form another grand coalition.
Macron, who is driving attempts to reform the EU in the wake of Britain's decision to leave the bloc, refused to be drawn into trying to predict the outcome of Sunday's vote, saying it could be “counterproductive”. But he stressed the pro European credentials of the SPD and said the coalition blueprint showed “true European ambition”.
“The chancellor has ambitions for Europe, SPD leaders have shown they have ambitions for Europe, and the coalition outline has them too,” Macron said.
Macron has made no secret of the fact that he would like to see the SPD, which is enthusiastic about his proposals for closer eurozone integration including a common budget, remain on Germany's front benches. Some of Merkel's conservative allies are however more reticent about the prospect of closer economic integration.
Last week Macron said a conservative-social democrat tie-up would be “good for Germany, good for France and above all good for Europe.”
Leading economists from both countries on Wednesday published a “blueprint for reform” for the eurozone that calls for new fiscal rules and an independent watchdog to make the currency more resilient against crises.
But the economists declined to specifically back Macron's idea for a joint budget or eurozone finance minister.
Merkel and Macron finished the day at the Paris Philharmonic, where they attended a piano recital by Daniel Barenboim dedicated to French composer Claude Debussy, who died one hundred years ago this year.