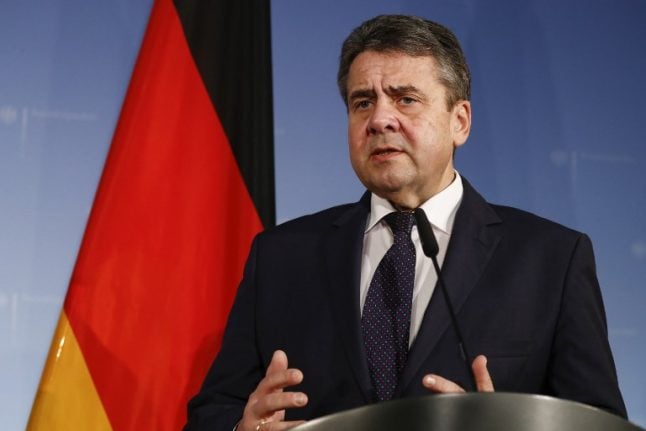 German Foreign Minister Sigmar Gabriel. Photo: Odd Andersen/AFP
France and Germany, once bitter enemies, “have a joint responsibility to develop all of Europe further,” he told AFP, highlighting “reform of the economic and monetary union” as a top priority.
Historically the two countries have been the powerhouse of the economic integration project that became the European Union. But French President Emmanuel Macron's plans to shore up the 19-nation euro single currency area and deepen European integration are on hold while Chancellor Angela Merkel — cautiously in favour of the scheme — battles to form a government.
Gabriel's Social Democrats are hesitant to renew a right-left “grand coalition” with Merkel's conservatives, fearing their vote at the next election could plunge yet further from last year's historic low of 20.5 percent.
“We have to grasp the historic opportunity that we have with Macron, a convinced European,” Gabriel insisted, “otherwise one day the EU will only exist on paper.”
French and German leaders have been making a show of unity in recent days as the 55th anniversary of the Elysee treaty approaches. Signed by President Charles de Gaulle and Chancellor Konrad Adenauer — the founding leaders of modern France and Germany — the 1963 document aimed to ensure the two countries' governments are tightly bound to one another.
The French and German parliaments are set to pass a joint resolution Monday calling for an update of the Elysee treaty.
MPs hope the vote will usher in “further steps to deepen Franco-German friendship” Volker Kauder, head of the conservative CDU group in the Bundestag (German parliament), told AFP.