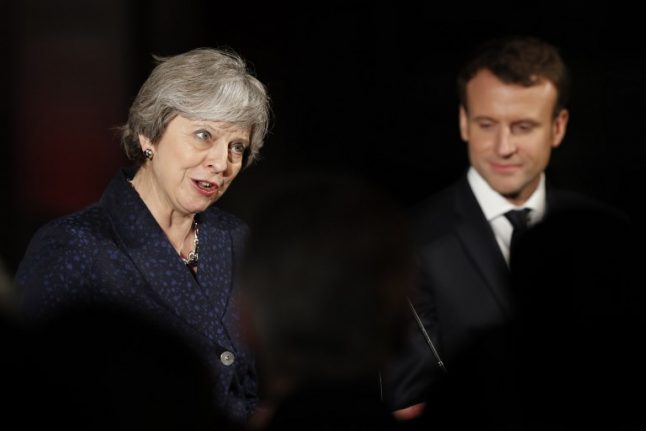 French President Emmanuel Macron looks on as Britain's Prime Minister Theresa May speaks at an event at the Victoria and Albert museum in central London on Thursday. PHOTO: ADRIAN DENNIS / AFP
Macron, who met British Prime Minister Theresa May for talks on Thursday, said there could not be complete single market access without fully signing up.
However, Britain could strike a deal that would fall between full access and a regular trade agreement.
“For sure, you will have your own solution,” Macron told BBC television, in extracts released on Saturday. “But… this special way should be consistent with the preservation of the single market and our collective interests.”
“To get full access to the single market, you need contribution to the budget and you have to accept the freedoms… and you have to accept the jurisdiction,” the 40-year-old French president continued. “As soon as you decide not to join these preconditions, it's not a full access. So it's something perhaps between this full access and a trade agreement.”
After Thursday's talks with May, Macron said France would not give in to British demands for the financial services sector to be covered by a Brexit trade deal. Full access for financial services to the single market “is not feasible”, he told the BBC.
“There should be no cherry-picking in the single market because that's a dismantling of the single market.”
Macron said Britain could have “deeper relations” with the European Union than other countries, as is the case with Norway.
Following a referendum in 2016, Britain is due to leave the EU in March 2019.
“I do respect this vote, I do regret this vote, and I would love to welcome you again,” Macron said.
The full interview is to be aired on Sunday.