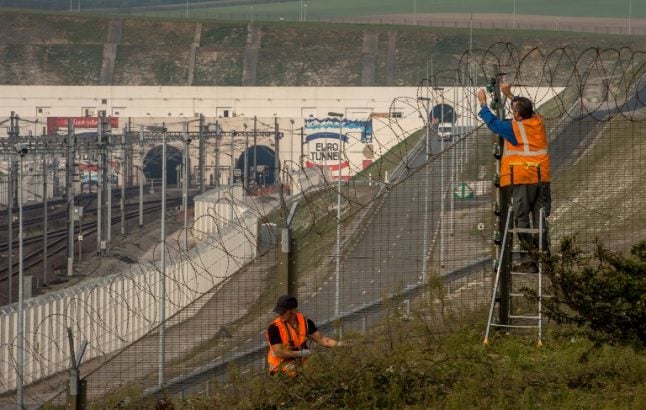 The UK announced on Thursday that it will spend another €50 million, or a large part of that sum, on boosting security at the port of Calais, which for years, if not decades has been a jumping-off point for migrants and refugees attempting the often perilous journey across the Channel.

That brings the total amount of money the UK has spent on security at Calais in recent years to over €170 million.

London has built fences at the Eurotunnel port, paid for CCTV, extra police and detection technology to find out if anyone is hiding out in trucks. It has also paid €2.7 million for a much-criticized 4-metre high wall that stretches one kilometre along the approach road to Calais port, and helped pay for the dismantling of the infamous Jungle camp, once home to 10,000 people.

And yet the migrant crisis in Calais rumbles on with around 1,000 refugees camping out in and around the town in squalid conditions trying to escape the attention of riot police who have been confiscating their belongings and cutting up their sleeping bags.

“Increasing security to tackle the migrant crisis does not only not work in France, it doesn't work anywhere in the world,” Franck Esnee, northern France's regional coordinator for charity Medecins du Monde told The Local on Thursday.

“More security doesn't stop people trying. You can put twice as much money into more police but you can't change the fact the UK is just 30km away across the Channel.

“We are convinced that spending more money on more security at the border will only mean more risk and more danger for the migrants,” said Esnee.

“Despite the risks and the dangers in places like Libya, people are still making those journeys. Building walls in Calais or along the Mexico border won't stop people coming.

“We denounce this attitude towards security and this idea of creating a fortress around Europe's borders.” Back in 2015 London stumped up €10 million for a new control centre at the port, as well as extra French policing units, additional freight searches, and tighter security at the entrance to the Channel Tunnel through more fencing, cameras, floodlighting and infrared detection technology.
That year Eurotunnel, which runs the Chanel Tunnel, demanded compensation after it incurred a security bill of €13 million after scores of disruptions caused by migrants on the train tracks as they attempted to get through the tunnel. Eurotunnel will no doubt be quite happy with the UK boosting security.
But while the French government and Eurotunnel might be happy to take the money, aid organisations have long lamented Britain's focus on security and little else.
“Up until now the British government has just chosen to throw money at the problem and pay for new security fences, but it's not enough,” an aid worker in Calais told The Local previously.

Esnee says rather than spending the money on this side of the Channel, London should be simply use the money to take on its responsibilities in helping deal with the migrant crisis.

He argues the controversial 2003 Touquet agreement which allowed the UK to place its border on French soil has given successive British governments an excuse “to stay in the shadows” when it comes to the migrant crisis in France.

“The UK should be at the heart of the efforts to solve the crisis,” he said.

On Thursday Britain was reminded of its promise to grant asylum to refugee children in Calais, a vow it has failed to keep, according to aid groups.

One of the other knock-on effects of spending so much money on security at Calais is that it persuades those intent on getting to the UK to try alternative routes.

Back in 2016 The Local reported that other Channel ports along the coast such as Ouistreham near Caen and Dieppe were seeing more and more migrants attempting to make the crossing.

The much-publicized closing of the Jungle camp in Calais also resulted in migrants heading to other ports. Many made their way to Dunkirk.

“If you create a blockage in Calais, which there already is, and if there's no legal way to demand asylum in the UK, then there are two effects,” say Esnee.

“Firstly the refugees will seek the help of traffickers and secondly they will look to new ways to get across the Channel because they still want to get across to the UK.

“We have seen asylum seekers crossing the Alps in winter from Italy to France. Walls and police won't stop them.”

The migrant crisis has dominated the annual Franco-British summits in recent years and Medecins du Monde and other aid groups had hoped this one would have a different focus.

“We hope Theresa May and Emmanuel Macron will discuss how to invest this money on how migrants are treated and housed in France and on creating a legal route to the UK so people can be offered protection.

“We want the money spent on that rather than simply blocking them at the border.”