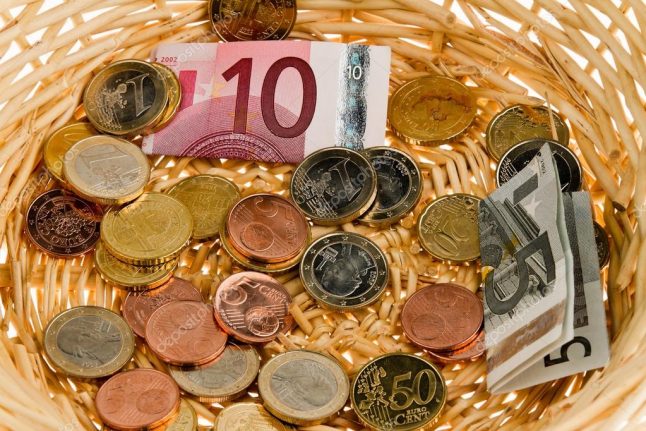 Photo: ginasanders/ Depositphotos
This could mark the beginning of the end for the famous rattling of the church collection basket.
For the first time in France the familiar beeping of the contactless payment — usually reserved for supermarkets and brasseries — will be joining the church chorus.
The high-tech move is taking place at Saint-François de Molitor, a church located in one of the wealthiest areas of Paris,
That means that during Sunday Mass, on top of the traditional baskets that circulate the pews, there will also be five connected wicker baskets, equipped with a smartphone linked to a mini-payment terminal (see tweet below) inviting churchgoers to donate €2, €3, €5 or €10.
That rules out the old excuse used by churchgoers over centuries of not having any cash.
In Paris, church donations — used to pay for expenses such as heating and electricity in the parish — have stagnated in recent years at an average of €3.
But the parish priest of the church in question, Father Didier Duverne has denied the move is about making money.
“It amuses me, it's fun. Our parishioners are receptive to novelty,” he told Le Parisien which first revealed the story. “The interest is not economic.”

“The experiment is not to increase the amount of donations but to anticipate the future, when people don't carry money anymore, even for their baguette,” he added.
Some may even see it as a welcome relief from having to remember to have the right money on them ready for church as well as a chance to keep their donations anonymous.
“The parish and the priests will never know the names of the people who give,” said Christophe Rousselot, the director of financial resources development in the diocese of Paris who came up with the prototype with French start-up Actoll.
“The real challenge is that it goes as fast as possible,” said Rousselot. “In our country, two-thirds of credit card holders have the option to checkout without typing code.”
“The Church has no reason not to get with the times,” he added.
If the experiment works, the beeps of contactless payments may be ringing out from churches across the French capital sooner rather than later.