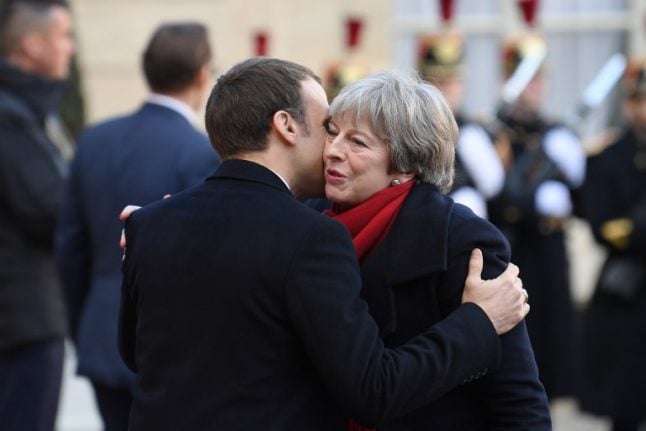 "Sssssshhh now, just tell me how much do you want Emmanuel?" Photos: AFP

The treaty, set to be announced at a summit in London on Thursday, will “complete the Le Touquet accord”, Macron's office said in reference to a 2003 deal that effectively put Britain's border in northern France.

The details are “still being finalised”, the French presidency said, but the treaty will include measures on how to manage unaccompanied minors, and Britain will make a “major” financial contribution.

At stake during Thursday's talks is a 2003 agreement between Britain and France which effectively moved the UK border onto French territory, meaning the area around Calais has become a bottleneck where migrants heading for Britain wait.

Interior Minister Gerard Collomb reiterated Tuesday that France would ask Britain to take in more refugees from northern France and increase their funding — not only for security measures, but also for the development of Calais.

“It's in their interests that things go well,” Collomb told the France 2 television channel on Tuesday ahead of a meeting between Macron and British Prime Minister Theresa May on Thursday in London.

Referring to the importance of Calais for the British economy, which faces uncertainty ahead of the country's exit from the European Union, Collomb added that “a quarter of their trade transits through Calais.”

The original text of the Touquet accord, which came into force in February 2004, implemented joint controls at coastal ports in both countries as Britain, which is not part of Europe's Schengen visa-free zone, looked to bolster efforts to keep migrants out.

Later accords led to Britain financing some of the controls and security operations in Calais, just across the English Channel from its own port in
Dover.

Calais has long been a sore point in French-British relations, and Macron on Wednesday called for better cooperation in managing the border with Britain ahead of his first trip to London as president. Migrants hoping to stow away on trucks bound for Britain have long been drawn to France's northern coast, with the squalid “Jungle” camp near Calais
once housing some 10,000 people before it was bulldozed by the government in late 2016.

Hundreds of migrants remain in the area, with police routinely breaking up makeshift camps of people hoping to head to Britain, a favoured destination
for Afghans and east Africans.

French officials argue the Le Touquet deal has worsened Europe's migrant crisis by creating a huge backflow of migrants in the area, lured by a belief
that it is easier to secure asylum and work permits in Britain.

A French human rights commission in 2015 said the accord had made France the “police branch” of Britain's immigration policies.

Macron made a renegotiation of the Le Touquet deal one of his campaign pledges, and Interior Minister Gerard Collomb signalled Tuesday that Paris would ask Britain to take in more refugees from northern France and increase its funding. Macron sought to reassure the fishing industry and business owners in northern France on Tuesday over fears that Brexit will harm the local economy next year.

“I realise how much uncertainty there is in several economic sectors; fishing, industry, logistics,” Macron said in a speech in the northern port of
Calais, ahead of a meeting with Britain's Prime Minister Theresa May on Thursday.

A so-called 'hard border' with Britain could crimp the billions of euros' worth of goods that flow through the port each year, a grim prospect for local
businesses and industry executives.

“No matter the changes to come and the relations between the European Union and the United Kingdom, the territory will remain attractive in these areas,” he said.

He said France would press its concerns with the EU's chief Brexit negotiator Michel Barnier, who is scheduled to begin talks on an eventual
trade deal with Britain in March.

“The region's interests will be fully taken into account in the negotiations that France will lead, and I will make our case known in March
with our negotiator, Mr Barnier,” he said.

Calais has long relied on its cross-Channel ties with Britain, which has also made the city a magnet for migrants hoping to reach Britain — a
challenge that was the main focus of Macron's speech.

Migrants regularly try to stow away on the hundreds of trucks crossing to Britain each day.