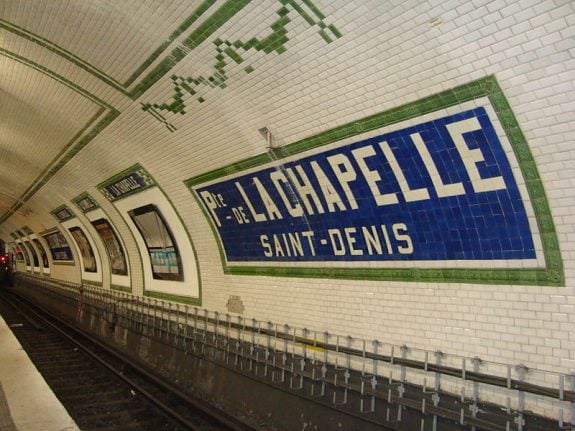 Hegor/Wikicommons
The violence associated with the drug dealing and addiction has been on the increase at certain Metro stations in the north east of the French capital.
And as a result certain drivers, particularly on Metro lines 12 and 4 have been choosing not to stop at the most affected stations in order to protect both passengers and themselves, they say.
One Line 12 driver has described in detail the phenomenon which he says has been growing over the past few years.
“Historically, line 12 has always been at the main core of drug addiction, especially Porte de la Chapelle,” Eric Chaplain, a Paris Metro driver told LCI.
“There used to be a strong presence of drug addicts but there was some kind of 'respect' between them and the RATP employees.
READ ALSO: “They knew they were taking advantage of our platforms, but at the same time, they had to respect the place, keeping it clean and appropriate, but the scourge got worse month on month and year on year.”
He said the situation really degenerated about 18 months ago.
“For example, last year, there were no fewer than 850 traffic interruptions and power cuts because drug addicts crossed the tracks, carried out their business on the tracks, or pulled the alarm to stop the trains to either sell or buy drugs,” Chaplan, who is also a representative of the trade union SUD-RATP, said.
Since the last quarter of 2017, there have been six accidents at work due to verbal or physical aggression, Chaplain said, adding that these range from insults to spitting.
“Everyday at Marx Dormoy (a northern station on line 12), among others, there are up to seven or eight drug addicts using illicit substances, either crack or heroin, in sight of employees and travelers. It's intolerable,” he said.
On top of what Chaplain calls this “visual violence” he said there is also “aggressive begging”.
“As soon as they wake up, they are in need and are looking for drugs right away, so they do their rounds but also fight with each other on the trains using Stanley knives or screwdrivers.
While the drug dealers tend to base themselves around Madeleine and St Lazare (stops on line 12 near the city centre), the addicts are based at more northern stations such as Marx Dormoy, Porte de la Chapelle and Marcadet-Poissonniers, he said.
Regarding the frequency of acts disrupting traffic, the SUD-RATP staff delegate indicated that this occurs “several times a day”. Photo: AFP
At night he says the drivers call the area “Junkie Land” which gives an idea of the seriousness of the problem.
“Unfortunately, if we do nothing, the rest of the network may suffer the same fate,” continues the unionist who appealed to the authorities to help deal with a problem that he says the RATP which runs the Metro and bus network in Paris can not handle on its own.
“There are not 10,000 solutions, we simply have to 'reconquer the territory',” he added. “We have let it go for years and the only way to stop the phenomenon is to have a police presence. Obviously if they sleep, do not destroy anything, do not break anything, they will be left alone, they are human beings, and from a social point of view, these people must also be helped.”
The Unsa union, which represents the drivers, has also warned of the risk for the people travelling on the Metro in this area, adding that there will be a discussion about security on January 19th.
“Between the brawls that occur on the platforms, which sometimes end up happening on the train or across the tracks, drivers could hit someone, or crush them,” Jean-Marc Judith, trade union representative for the RATP, which runs the Metro and bus network in Paris told RTL.
Then there's “all the consequences in terms of the police” and the psychological problems it may cause for drivers, he said.
The “number of attacks on travelers and RATP staff is becoming increasingly dramatic”.
An agreement has been signed between the RATP, the local authorities and government ministers tasked with fighting drug addiction issues, in an attempt to find long-term solutions.