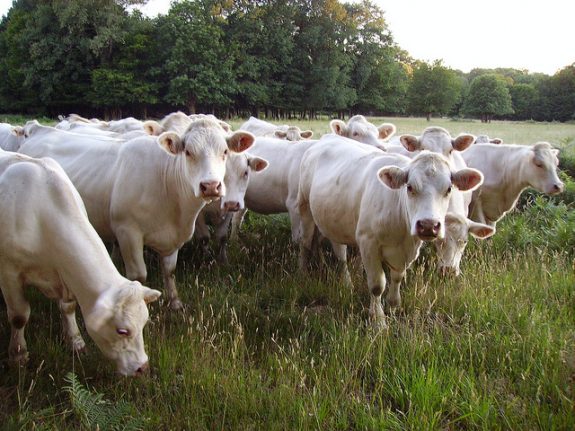 Photo: JPC24M/Flickr
Cedric Mandin, who raises some 800 Charolais cows with his brother in France's Vendee region, is the fourth generation of his family to own their farm, and he fears he will be the last.
The source of his worry is a huge trade deal being negotiated by the European Union and the four Mercosur members Argentina, Brazil, Paraguay and Uruguay — an accord whose signature seems closer than ever.
If the treaty goes through, “we would be in an impossible situation, untenable”, said Mandin, 44, who inherited his 270-hectare farm 20 years ago.
“Today we're paid between 3.60 and 3.70 euros per kilogramme of meat, but our production costs are 4.50 euros a kilo,” he said while chain-smoking cigars.
“We already have a deficit and face a difficult situation on our farms. If on top of that we add these massive imports of South American beef in Europe, we're liable to see prices collapse.”
France's cattle industry, the largest in Europe, has been facing a deep crisis of rising costs and lower prices — against a backdrop of falling meat consumption.
Many ranchers are barely able to make a profit, while debt levels have been rising. Photo: AFP
'We've tried everything'
“We've been in a crisis for four years, four years that we've been trying to streamline everything, clamp down everywhere, cut our costs to the limit,” said Mandin, shrugging his shoulders.
“There comes a point where you can't cut any more — in terms of competitiveness we've tried everything.”
If the EU and the South American countries reach the agreement, at least 70,000 tonnes of Mercosur beef could enter Europe each year, free of custom charges.
European negotiators consider this an enormous amount, while the South American side says it falls well short of what is necessary.
The new imports would represent just one percent of Europe's total beef production, and 4.5 percent of France's output.
But ranchers say the current market structure could not absorb the increase, which would come on top of the 65,000 tonnes the EU has agreed to allow in from Canada as part of a trade deal.
That assessment is shared by Philippe Chotteau, chief economist at the French Livestock Institute, who said the lower-priced beef will “aggravate the crisis”.
He estimates that retail prices could fall 10 percent, while the national FNB cattle institute says 25,000 to 30,000 jobs could be lost in France.
“French farmers will be the losers in this deal,” Mandin said while walking among his white cows, sheltered in a barn from the harsh winter. Photo: AFP
'French uniqueness'
Beyond the economic threats, many French ranchers also say they are worried about insufficient tracing and food security regimens in Mercosur countries, pointing to the scandal over rotting Brazilian meat passed off as safe last year.
Several countries imposed bans on meat imports from Brazil, the world's largest producer.
“Our animals are tracked since birth. Over there, at best when they leave the ranch,” Mandin said.
“I can tell you the name of the father and mother of my cows. There is genuine traceability throughout the animal's life. We're trying to defend this French uniqueness.”
But after two decades of stalled talks, negotiators have made large strides in recent months and appear determined to reach a free-trade deal, taking advantage of a global leadership void in the wake of US President Donald Trump's election.
The European Commission wants to strike a deal early this year, before a window of opportunity might close with elections expected next year in Brazil.
France, however, has said it does not want to “rush” on the matter, given the potential impact on its hard-hit beef producers.
“The content has to take precedence over the calendar,” Jean-Baptiste Lemoyne, France's secretary for foreign trade, said in Brussels in November.
by AFP's María Elena Bucheli