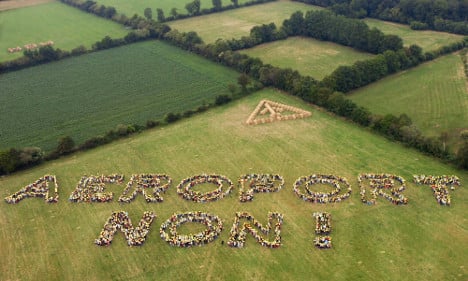 Protesters form a human chain to spell out their opposition to the airport. Photo: AFP
It's one of the longest-running disputes in French history and on Wednesday a final decision will be made.
For decades, environmentalists have been against the planned construction of an international airport in Notre-Dame-des-Landes, near Nantes, and which is intended to be the gateway to western France.
They say the airport – which was originally due to open in 2017, would represent a devastating end to 1,650 hectares of wetlands, home to its own eco-systems.
But on the other side of the fence are those who say the airport, which would replace the current Nantes airport and serve 9 million passengers a year, would be a huge boost for the economic development of western France. The map above shows the current Nantes Airport, marked as 1, and the proposed new airport, number 2. Photo: Google maps
French Prime Minister Edouard Philippe will announce on Wednesday whether or not the government is giving the airport the green light or scrapping the plans altogether. Opponents to the airport in a recent protest. Photo: AFP
The group that's been contracted to build the airport is desperate to get started, because in a few months they won't have permission to build, thanks to the breeding season of some endangered species in the area.
So, the €580 million ($747 million) question – does France really need the airport?
No to the airport
The strongest voice against the airport comes from a group called ACIPA which has been fighting the plans since 2000. They've gathered over 50,000 signatures from opponents – including pilots, engineers, and even the ex-CEO of Nantes Regional Airline Company. It's this group that organizes the protests.
The ACIPA says it is independent from any political or religious groups, and serves primarily to inform the public about how life will be affected by the airport – whether that means closed roads, rail developments, or land misuse.
Genevieve Lebouteux, an elected member of ACIPA, says there are two main reasons they oppose the airport.
“The main reason is because it's useless. We already have an airport in Nantes that works fine, we don't need a new one,” she told The Local.
“Any arguments about why we should build a new airport are false, they're wrong, they're lies. You will see that the politicians who want the airport don't want any public opinions to be measured on the topic.” Opponents to the airport protect a barricade on a road in the “Deferred Development Zone”. Photo: AFP
She added that the second reason was environmental.
“If we have to build an airport somewhere in Nantes, it can't be in the current chosen spot. This is an area that's protected because of the humid zones.”
Other strong voices include the 11 families and four farmers living on the site, who have refused to leave, but wh would have to be evicted.
Bailiffs visited the home of Virginie Olmos and Sebastien Martin with a cheque for €18,000 ($20,000) in compensation for their moving expenses – but the couple did not accept the money.
“We refused to take it. They must be joking. They say we have 30 days to leave, but we're staying!” Virginie Olmos told AFP. Some protesters live on the land where the airport is to be built. Photo: AFP
In fact it was these expulsion orders that prompted the massive protests in 2016.
Also fiercely opposed to the plan are a resolute group of anti-airport protesters who have occupied the area for years.
They call the site the 'Zone a Defendre (ZAD)' or zone to defend – as a rebaptising of the authorities' name for the area, the 'Zone d'amenagement differe (ZAD)' — a technical term meaning the site as been earmarked for construction.
One of the group spoke to The Local on condition of anonymity.
“This airport is a total symbol for the destruction of the environment. And it's a useless project, it's not going to go anywhere. I'm fine with the idea of building things that are actually needed, but this airport would be useless and everyone knows it,” he said.
“I am not going to move.”
The man said he has set up his own camp at the exact spot where the entrance to the airport is planned to be. There, he lives with other people from the environmentalist protesters, growing vegetables and raising animals – including chickens, pigs, and sheep.
The group's official site says that their goals in living on the site “are many”.
“To live on a protest site, where we can be close to those who’ve been opposing the project for 40 years and to have the power to act when construction happens; to make use of abandoned spaces to learn to live together, to cultivate the land and to be more autonomous from the capitalist system,” they write. A demonstrator stands with a banner expressing against the controversial project. Photo: AFP
Yes to the airport
If you want to see more visitors in western France, building a bigger airport is a no brainer. The airport is planned to be able to accommodate 9 million passengers a year, which is three times the capacity at the current Nantes-Atlantique airport.
So why not just expand the Nantes-Atlantique? It's not that easy. The old airport is built too close to the city of Nantes. Indeed, none of the airports in the area (Rennes, Angers, St-Nazaire and Vannes) are suitable for expansion.
Building a brand new airport is the logical step forward, the government has said since 1973.
Those working in tourism agree.
“The added flight capacity would help tourism in western France absolutely, especially from an EU perspective,” John Romano of tourist company LinkParis told The Local.
He said it was clear that tourists would prefer to fly from cities like London directly to western France, rather than flying to Paris and then taking a train – or indeed spending extra money on the flights to the current airports in the country's west. Opponents to the airport in a recent protest. Photo: AFP
So, with both sides quite clear on their stance when it comes to the Notre-Dame-des-Landes, and following Monday's expulsion ruling, we could see the first spade in the ground any day soon.
But smart money says that given the long and colourful history of the plan, it's best not to hold your breath.
A version of this article was published in 2016