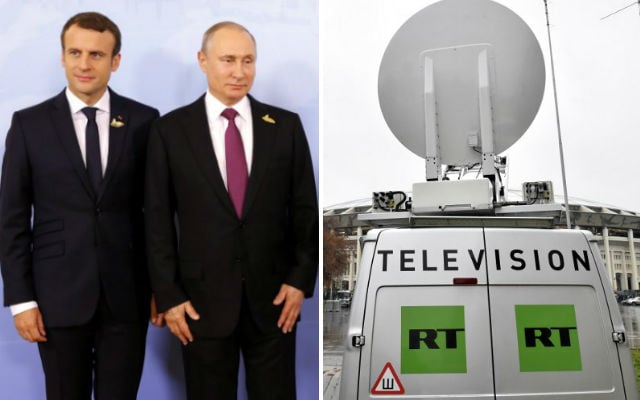 Russian state broadcaster RT on Monday accused France's presidency of turning away its journalists, saying employees from its new French-language channel were refused accreditation twice in a week.

President Emmanuel Macron announced plans in early January for legislation to stop the spread of fake news in a veiled reference to RT and state news agency Sputnik, which he has called spreaders of “deceitful propaganda” and “organs of influence”.

“The Elysee (French presidential palace) has refused accreditation to our journalists twice in one week,” RT editor Margarita Simonian said in a statement on the channel's website.

A journalist from RT France, which was launched in December, was turned away from a spokesman's briefing at the Elysee palace in Paris on Monday, the statement said.

“When I said I worked for RT, I was told that I was not a journalist and only journalists were allowed in,” said an RT reporter, adding that he had presented his press card.

The broadcaster said it was also rebuffed in Rome on January 10, when the “French president's team did not authorise RT to attend a summit” of southern European Union leaders.

“The request for accreditation was accepted, but when our team arrived in Italy, the Elysee press service stopped responding to calls from our journalists,” according to RT.

The fake news will only be “defined by one party, without discussion, without proof, ignoring any argument,” Lavrov said.

'Our slogan is: dare to question'

RT has been accused of meddling in the US election along with state news agency Sputnik and spreading rumours about Macron during this year's presidential election, French regulators are on their guard.

The head of France's CSA broadcasting authority, Olivier Schrameck, has warned that body will be watching RT's every step and will intervene quickly in the event of any “anomalies”.

In Britain, RT has already received 14 warnings from regulator Ofcom about reporting deemed untruthful or biased, particularly on Syria — where Russia has propped up President Bashar al-Assad — and Ukraine.

Russia Today was set up in the mid-2000s to counter what Russian President Vladimir Putin saw as the dominance of American and British international media organisations and their allegedly pro-Western bias.

The channel is seen by its critics as giving a platform to conspiracy theorists as well as far-right or anti-establishment figures who emphasise Western hypocrisy or corruption.

Xenia Fedorova, RT's station manager and editor in chief insists the network has no more of a hidden agenda than any other state-funded global network, such as BBC World, Al-Jazeera or France 24.

“We are not coming to France with the intention of broadcasting fake or partial news,” she told AFP in an interview in October.

“Our slogan is: Dare to question. We want to encourage viewers to ask questions and to think outside the information bubble of the mainstream media,” she said, adding that editorial decisions would be made in Paris, not Moscow.

With a launch budget of around 20 million euros ($23.6 million), the French channel is one of the most ambitious projects to date for RT, which already broadcasts in English, Spanish and Arabic.

The tone of RT's existing French coverage suggests that critics of the centrist 40-year-old will be well served.

While French media outlets were generally impressed by Macron's engagement with young Africans on a recent visit to the continent, RT focused on
criticism of a throwaway remark seen by some as derogatory towards Burkina Faso's president.

The Russian network also continued to play up protests against Macron's recent labour reforms long after the movement had begun to peter out.

“So they give space to the views of the European far right but also to Occupy Wall Street… in a very distinctive style that is much more impertinent than most other networks,” he said.

“The idea of RT is: 'we will tell you things you will not hear elsewhere',” he said, emphasising its focus on what it portrayed as the “hypocrisy” of the
West on issues such as human rights, corruption and foreign meddling.

But despite its best efforts, the network has struggled to attract top French talent.

In an interview this month with French daily Le Monde, Fedorova complained of “political pressure on people who want to work with RT or speak well of it”.