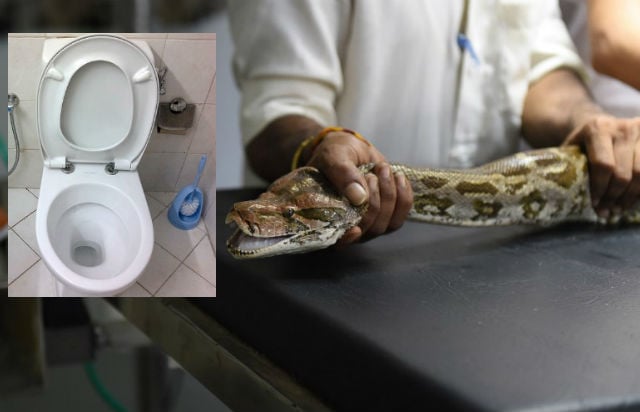 If your toilet isn't flushing properly, the blockage might not be due to what you initially thought.

The 53-year-old man from the city of Grenoble came eye to eye with the “1.5 to 2-metre” python went he popped to the loo at his apartment in the centre of the southeastern city of Grenoble.

As the man, who has not been named, walked in to the toilet at around 9.30pm he noticed the snake's head peeping out of the toilet bowl just as he was preparing to relieve himself.

“It was frightening,” he told Le Parisien newspaper.

And while he wasn't able to relieve himself in the way he had planned, he was nevertheless mightily relieved.

“Thankfully I didn't have a heart attack. And I could quite easily have been bitten in a sensitive area, if you know what I mean.”

The man said he ran out of his bathroom and slammed the door shut. He then decided that his eyes must have been deceiving him and convinced himself it wasn't possible that there was a snake in his toilet.

So he went back in.

“I opened the door again and saw a 1.5 to 2-metre snake coming out of the toilet bowl. It was a huge python. So I called the fire fighters right away.”

The animal later died apparently due to chemicals from bathroom cleaning products that it had ingested.

Experts say the snake must have got into the man's toilet in his second floor flat by passing through the apartment block's pipes.

“I noticed that in recent days the toilet was not flushing properly, but I couldn't have imagined that a python was living in the pipes,” said the man.

But where did the snake come from?

According to reports a resident on the fourth floor of the block raised the alarm a few weeks ago when his pet python went missing. He hasn't claimed the reptile found in his neighbour's bathroom was his, but residents are in doubt.

“How many people keep a python at home,” said one.

Meanwhile the victim says he has been left traumatized.

“I'll never go to the toilet in the same away again. I push the door open, turn the light on and examine the toilet bowl from a distance to check there is nothing in there,” he said.

“At first my partner said she wouldn't step foot in the flat ever again. It's really not normal that a python is wandering around the bathroom pipes.”

Nevertheless it's not unheard of.

In 2014 The Local Spain reported how a snake slithered out of the toilet and bit a woman on her left buttock.

Iris Castroverde, the 30-year-old hairdresser and a mother of two young children, says she was seated on her toilet at around 11pm when she heard a muffled noise. This was followed by a splashing, and that's when she felt a bite on her backside.

“The whole suburb's gone psychotic because of this creature,” said one of her neighbours.