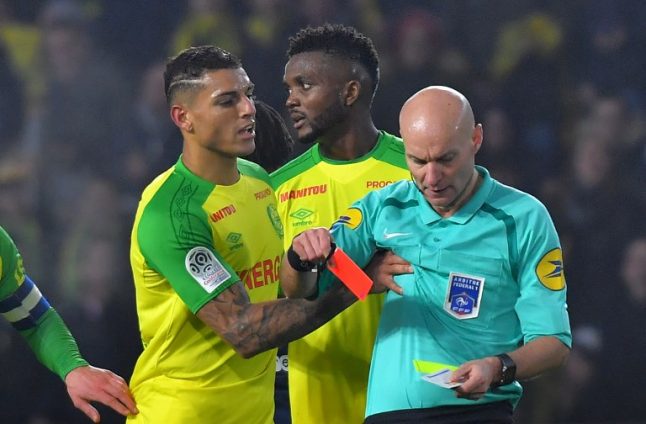 French referee Tony Chapron became the pantomime villain of Paris Saint-Germain's 1-0 win at Nantes on Sunday, after responding to an accidental collision with Diego Carlos by kicking the Brazilian and sending him off.

In injury time and with PSG on the counter-attack, Chapron stepped across the backtracking Nantes centre-back Carlos and tumbled to the floor.

The official stunned the stadium and those watching at home by kicking out at Carlos while still on the ground, in an incident reminiscent of David
Beckham at the 1998 World Cup, before brandishing a second yellow card at the unfortunate player.

On Monday the French football federation suspended Chapron until further notice and will be hauled before a disciplinary committee.

He then issued an apology for the act.

“During the match Nantes-PSG I was knocked over by Diego Carlos, a player with Nantes. At the moment of impact I felt a sharp pain where I had recently suffered an injury.

“My unfortunate reaction was to stick my leg out towards the player.”

Chapron had infuriated Nantes officials with the gesture.

After talking to Chapron “He told me that he had never wanted to kick the player and that he had felt himself pushed in the back,” said

“It's a joke. I got 20 text messages from across the world telling me this referee is a joke,” Kita told French TV. “What do you want me to say? If I
speak too much I'll be called in front of an ethics commission. We have no right to say anything.”

Nantes midfielder Valentin Rongier had a good view of the incident and called for the referee to be given a lengthy ban.

“He says he slipped, but I know he kicked him,” Rongier told Canal+.

“I know it's very difficult to referee but you have to question them from time to time… We do that, we get a 10-match ban.”

Former England striker Gary Lineker and ex-Real Madrid goalkeeper Iker Casillas were among those to express their bemusement on Twitter.

“Surely the good man will have apologised. It was spontaneous,” wrote Casillas.

“Yes, for me it's agression and red! Three matches minimum!”