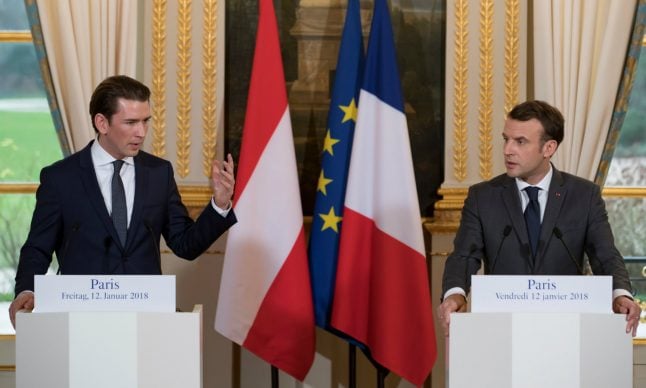 Kurz chose Paris for his first official bilateral visit since becoming the world's youngest leader at 31 in December.

The visit came 18 years after Austria's anti-immigrant Freedom Party was first included in a government, an event that triggered seven months of diplomatic sanctions by other European countries, led by France.

Nearly two decades later, the atmosphere was very different as 40-year-old Macron, part of a new generation of tech-savvy young leaders, welcomed Kurz for talks on the future of Europe.

Kurz, whose country has the only government in Western Europe to feature the far right, appealed for understanding.

“I'm asking you to give us a chance and to judge us on our programme and our actions. And maybe we will be able to convince you in the coming years, with our achievements,” he said.

Kurz insisted that his government was “pro-European” and that he shared Macron's vision on “numerous questions”, namely security and the fight against terrorism and radicalisation.

Macron, who defeated far-right leader Marine Le Pen in the final round of last year's presidential election, made clear his aversion to right-wing nationalists.

“I deplore the far right everywhere… but if it is present it's because we failed to respond to the anxieties on which it feeds”, he said.

But he ruled out remonstrating Kurz over his tie-up with the far right, which scooped the key ministries of interior, defence and foreign affairs.

“A European leader should not go about commenting on the elections of his neighbours,” Macron said.

The best response to the nationalist wave sweeping the continent was to have “a protective Europe”, Macron said.

He also voiced understanding for the “very strong sensitivity” around immigration in Austria, which drastically tightened its borders after receiving large numbers of migrants on the move through Europe in 2015.