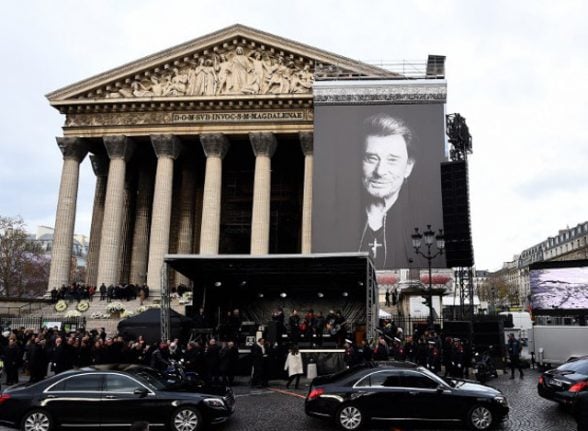 Johnny Hallyday's memorial at the Madeleine church in Paris. Photo: AFP
The mass will take place on the 9th day of every month at the church where the late singer's memorial was held on the same day in December.
Unsurprisingly the service will be slightly different from other masses and is likely to include one of the prayers that was said during Hallyday’s original memorial.
The singer’s name will also be mentioned during some readings and instead of traditional hymns, the organist is expected to play Hallyday's own songs. Photo: AFP
“We are already on our fifth church guestbook since Johnny passed away,” Father Bruno Horaist told Le Croix.
“I see people who need to express themselves, who give testimonies of affection. Many of the artist's fans come to burn candles and were frustrated at not being able to participate in the national tribute.”
The first mass in homage to Hallyday took place on January 9th, with the next set to take place on March 9th, following which Horaist said there would be a regular service on the 9th of every month.
This isn't the first unusual tribute to France's “King of Rock”. After his death a Paris Metro station was renamed after Hallyday and France saw a boom in bizarre memorabilia linked to the singer, including a photo alleged to be Hallyday in his coffin.
Hallyday who was known as the French Elvis died of lung cancer aged 74 on December 5th 2017.
READ ALSO: