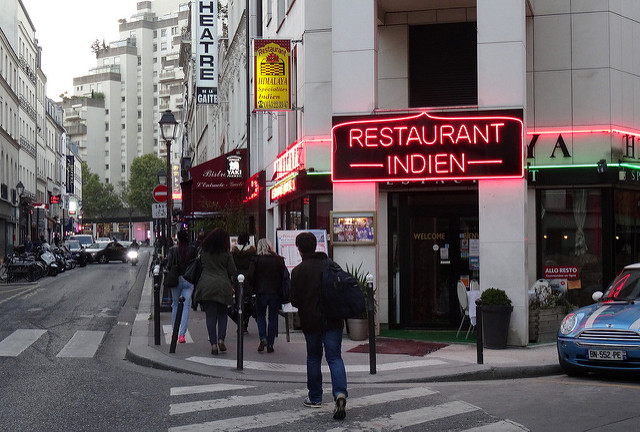 Photo: Jeffrey Beall/Flickr
The complaints about the lack of good quality curries available in France from British expats are frequent and numerous.
Recently a group of curry-loving British expats in France who yearned for a “proper Indian takeaway in France” even went as far as chartering their own plane, dubbed “curry air” to deliver a takeaway from the UK.
Many Brits who move to France lament that their days of chowing down on delicious spicy curries are behind them and their first port of call when visiting home is often not their family or friends but a curry house.
But is it true that a good curry is impossible to find on this side of the Channel? We asked our readers.
“You can't get a good curry in France because there has traditionally been very little immigration from the countries concerned ie Bangladesh, Pakistan and India,” said Mandy Davies.
“Most immigration is from North Africa and, in the East, from Vietnam. Even when you do find restaurants selling curry they are adapted to the French taste. In my local town that means serving it as a sandwich with frites!!”

Certainly can't get a good one round here in the Loire.

And crucially tailoring to it to French taste mean very little spice and much smaller portions to what curry eating Brits might be used to.
READ ALSO: Reader Carlos Nilmmns agreed: “The last time I ordered pakora I only got 2 disappointing little crumb-like balls which accompanied some greasy fritter type thing which was not pakora… None of the restaurants I've visited here seem to put any spice in their curries either.”
And Liam Bogit told of his curry woes in the south of France.
“I have frequently eaten in Aix and in Salon and the food was tasteless and the popodoms were tiny and dry. I don't know whether it is also a question of getting the supplies (just like finding it hard getting decent beef for a nice roast),” he said.

Unfortunately Asian community caters to French taste, which is bland and almost spice free. French like Asian food only if it taste like coq au vin 🙂 Very international people! There r some authentic Asian restaurants in Paris, everything else is crap with loads of paprika lol https://t.co/O68qOnxqXC

Many readers said that while it might not be impossible, finding a good place for a curry in France could be a challenge.
“You really REALLY have to know where to look,” wrote Kieran Colfer. “And know some natives from whatever country you're looking for the curry from. And don't ask any French people, they don't know anything about curry, or spices.”
“Every 'ethnic' restaurant with very few exceptions tailors their recipes slightly to suit the local palate, so, 'genuine' is hard to get,” he added.
Some readers suggested that if you're looking for a good curry in France, it might be best to just learn how to make one yourself at home. Photo: SteFou!/Flickr
“Actually….do it yourself…it’s easy. Curry powders, mixes and paste – Indian and Asian – are available at many markets as is coconut milk,” said Ken Stern.
Another reader, Karin McKenna agreed: “You can [find them] if you make them yourself. Unfortunately, Le Curry, is frequently nothing more than a faintly spicy yellow sauce.”

Only if you make it yourself! They’re so mild as to be almost not curry at all. We tried ones in Paris, Nice, Toulouse, Bordeaux, La Baule, La Roche sur Yon, probably missed a few…

Others suggested a more extreme solution for getting a good curry.
“Just catch a ferry to Brexit Kingdom for a proper Indian. Or be content with french food, it is good,” said Chris Gee.
But there were some who were positive about their curry experiences in France.
“There are some fantastic Indian restaurants in the bigger towns!!” said Kayley Wells.
And if you're in Paris Steve Hayes recommends the Indian restaurants on Faubourg St Denis just alongside Gare du Nord including Dosas.
“We get up to Paris, eat there and then have the traditional family joke, ok we've had our Indian now, no need to catch the Eurostar. Crowded, quick and excellent,” said Hayes.
As for us at The Local France we can recommend Aux Comptoirs des Indes in the 11th although you'll need to ask them to spice it up for you and Lakshmi Bavan in the 9th arrondissement.
We would love to hear your recommendations so please join in the debate on our Facebook page.
READ ALSO: