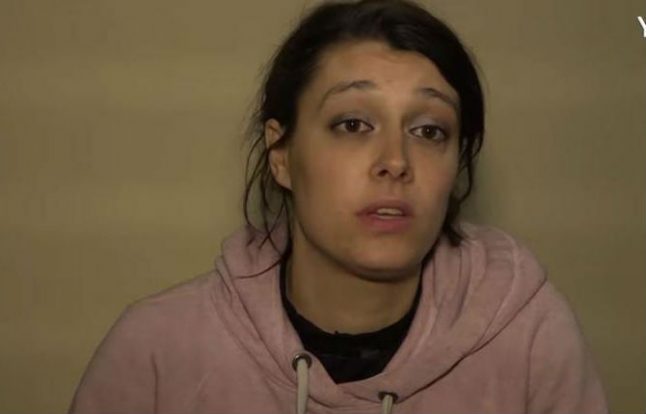 Photo: Screengrab YPG press office
The story of Emilie König has perplexed France.
Since news of her arrest emerged earlier this month the country has been asking how the 33-year-old former nightclub barmaid from the town of Lorient in Brittany ended up featuring on UN and US blacklists of dangerous Isis jihadists?
For the last five years she has lived among the ranks of Isis soldiers in the self-declared Caliphate. But she was captured by Kurds in Syria last month and faces trial accused of being an Isis recruiter and peddling the terror group's propaganda.
She is being held along with her three young children, all born during the conflict in the Middle East, along with several other French women.
This week her mother, who lives in Brittany told France's Ouest France newspaper: “She wants to come back. She regrets all her words and wants to pay her debt in France. She is asking for forgiveness from her family, her friends and her country.”
But the French government is not in a forgiving mood and insist she must face trial in Syria. (Screengrab 20 Minutes/TF1)
“They were arrested in combat,” government spokesman Benjamin Griveaux said. “They have been arrested, and as far as we know they did not surrender of their own accord.”
On Monday a weary looking König – without a niqab, appeared in a video released by Kurdish forces in which she responds to allegations she had been tortured.
It appears the Kurds want to prove she will face a fair trial in the Middle East and the chances of König coming home any time soon are slim. So how did the daughter of a French gendarme end up joining a terror group responsible for several massacres in her home country?
French documentary maker and sociologist Agnes de Feo met Emilie König in 2012 shortly before she left for the Middle East as part of a documentary she was making about women in France who wore the full Islamic face veil – the Niqab, which had been made illegal in public places.
De Feo described König as a tortured, lonely woman, full of hate who was keen to seek publicity and desperate to find love.
“Emilie had a great deal of anger inside her,” De Feo tells The Local. “She felt hatred towards society. Her life was a succession of failures: professional, family and personal. She had suffered a series of humiliations and I think she wanted revenge.”
König's own mother has spoken of her daughter's anger which developed during her adolescence and was mostly directed towards her father, a former policeman who had left the family when she was aged just two.
De Feo believes König's journey from a “sweet, cuddly” girl, as her mother described her, to a jihadist can be explained as a quest for “vengeance” against French society.
“She believed society was responsible for everything that had happened to her – the problems of her childhood and that fact she could never find a husband. She wanted revenge and she went to Syria to seek it,” De Feo says.
“I didn't think she would go to Syria, I thought it was all talk. But when I saw her in an Isis propaganda video shooting a gun (see pic below) I thought, she's got what she wanted. She's got her revenge.” But De Feo points out that contrary to popular theory around female jihadists, König did not come from a deprived background.
“She was raised in a detached house, not in a poor housing estate in the suburb of a city,” she said, describing her background as “petit bourgeoisie”.

König claimed to have converted to Islam aged 17 by her own accord, two years after dropping out of school. She explained the move to De Feo by saying she had “always felt spiritual and had always rubbed shoulders with Muslims”.

But the sociologist said she doubted much of what König said, especially on camera, and König's mother has said she converted to Islam only after meeting her first husband, an Algerian man.

König also endured a “nightmare” marriage to her first husband, a convicted drug trafficker, whom she married aged 23.
She described him as a “non-practising Muslim” who believed she was his property. König says he broke her nose three times before he was eventually imprisoned for domestic violence.
She fled to Paris from Brittany in 2011 to escape his clutches after he was released from prison.
It was around this time that she began to wear the full Islamic face veil.
For De Feo König wore the veil as a way of hiding her failures as a woman and as a mother and wife. It also offered her a new identity and allowed her access to a new support group: the radical Islamic movement, Salafism.
“In Islam she found a way to start a new life all over again, to begin again at zero,” De Feo tells The Local. The sociologist said König she would talk of how she regretted the time she spent working as a barmaid in a Lorient nightclub at the age of 18 and how she sought repentance. (Agnes de Feo)
“The niqab acted as proof of her radical change of life. It allowed her to hide her identity and escape the clutches of her former husband,” De Feo writes.
But König also only started wearing the full veil after France banned the garment from being worn in public places in 2010. Her choice of garment was also motivated by a desire to provoke the society she blamed for all her ills.
“French society did not accept her Muslim identity,” says De Feo. ” She was stopped by police and insulted by people in the street and by the parents of other children at her kids school.”
The insults compounded her hatred.
One particular video she recorded and uploaded to social media shows her being insulted by elderly people in a supermarket who object to her wearing the full face veil after it had been forbidden.
“It's not Mardi Gras yet,” says one man. She argues and shouts at others who point out she is breaking the law. Camera in hand she comes across as provocative and almost happy to have evidence on camera that the world is against her.
A former frien told Paris Match how Konig would appear one day in jeans and trainers and the next in the niqab, describing her as “manipulative and provocative”.
Wearing the full veil in public was not the only way she provoked authorities.
König immersed herself in radical Islam and made contact with Salafist groups online. She became associated with the extremist group Forsane Alizza, whose leader was jailed in 2015 on terrorism charges.
She became active online where she promoted jihadist propaganda and was banned from her mosque for handing out flyers calling for holy war.
“She began to search for an alternative ideal or utopia. For her that was Syria,” says De Feo.
By that point she had made her mind up to head to the Middle East, abandoning her two children in France. She had arranged to marry a French jihadist, who was already in Syria. But he was killed not long after she arrived.
Once in Syria she adopted the combat name of Ummu Tawwab and regularly posted images of herself online, where she can be seen armed and entirely covered. (Agnes de Feo)
Not only did she promote Isis propaganda but became involved in helping to recruit jihadists from France.
French intelligence sources also told AFP that she had called for jihadists in France to commit attacks against French institutions and the wives of French soldiers.
While her mother took care of her children back home, Knig had three more children in Syria, including twins.
They remain with her in captivity.
Asked if she thinks French society has any responsibility for König's journey and that of other female jihadists, De Feo insists her acts cannot be excused but believes the French must become “less obsessed by Islam”.
“These women head to Syria because they don't feel accepted as Muslims in France, they cannot practice their faith in peace, they are insulted in the street because they wear the niqab, even the veil,” she said.
“I think the Islamophobic atmosphere in France favours this kind of marginalization, which leads to radicalization.”
De Feo however doubts that König is really repentant.
“It's possible that she just wants to return to France because for those French who left to fight jihad, the war is over.”