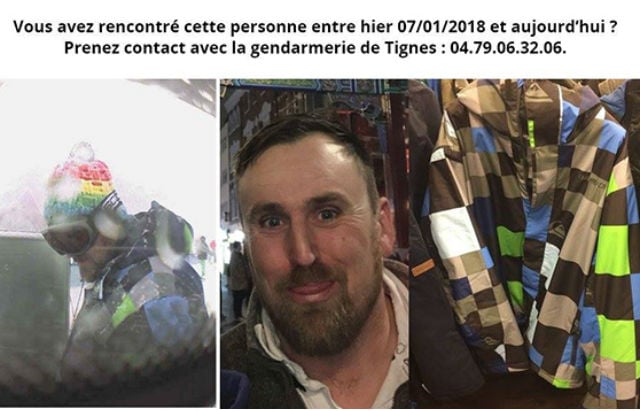 TIgnes
French gendarmes have launched a hunt for a “John Promell”, 39, who went missing on Sunday afternoon. Although it is believed his surname is actually Bromell.
The skier was on a family holiday in the Alps but had gone back up the slopes on his own for “one last run”.
He was last seen taking the Pacquis ski lift at around 4.30pm in the Tovière sector above Tignes for a last descent. He was wearing a colourful hat with a pompom and a checked jacket (see the pic).
Fears are heightened due to the amount of snow that has fallen in the area in recent days – described as a once in every 30 years phenomenon. The conditions have made it impossible for rescuers to send a search party out on foot up the slopes.
Ski slopes have been closed since Monday and the resort is on alert for avalanches. Resort staff are carrying out planned blasts to try to trigger avalanches to make the area safe.
A spokesman for Tignes gendarmerie said: “The lost man had been skiing all of Sunday with his family and had set off for one last run alone. Everything is being done to try and find him.”
Officers are asking anyone who might have seen him to contact the Tignes Gendarmerie on +33 (0) 479063206.

On Monday The country's weather agency Météo France placed the department of Savoie on red alert – the highest warning level –  due to the heightened risk of avalanches caused by heavy snow.

The agency described the danger as of “exceptional intensity” and said numerous avalanches were expected on Monday evening.

More than 1,800 of these avalanches could take unusual trajectories and may hit roads and villages, the agency said.

The public are advised to avoid high roads in the area and to heed the safety advice in ski resorts.

On Monday The Local reported the death of a young British man Owen Lewis, 22, who froze to death after getting lost on his way home from a bar in the ski resort of Risoul.