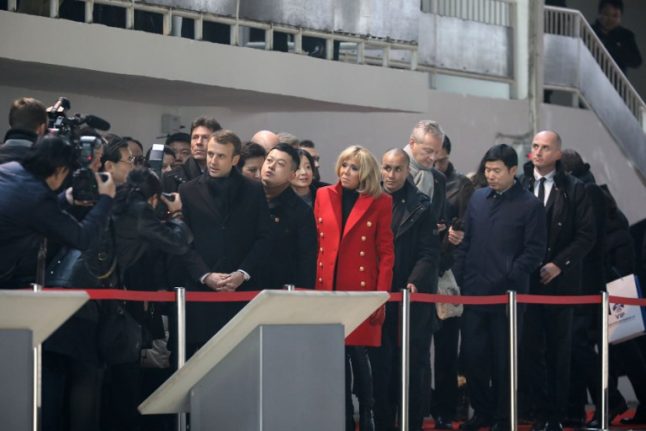 Along with his wife Brigitte, Macron visited the famous terracotta warriors in the northern city of Xian, a centuries-old Big Wild Goose Pagoda — a Buddhist site — as well as the city's mosque.

The 8,000-man clay army, crafted around 250 BC for the tomb of China's first emperor Qin Shihuang, is a symbol of ancient artistic and military
sophistication in a country that proclaims itself a 5,000-year-old civilisation.

Macron is beginning the three-day visit in Xian as a gesture to Chinese President Xi Jinping's colossal New Silk Road project, an ambitious initiative
to connect Asia and Europe by road, rail and sea.

The $1 trillion infrastructure programme is billed as a modern revival of the ancient Silk Road that once carried fabric, spices, and a wealth of other
goods in both directions.

Known in China as “One Belt One Road”, the plan is to see gleaming new road and rail networks built through Central Asia and beyond, and new maritime routes stretching through the Indian Ocean and Red Sea.

The project has elicited both interest and anxiety, with some in Europe seeing it as Chinese expansionism.

While France had been cautious on it, Macron heartily endorsed the initiative in an interview with China.org.cn posted on Monday.

“It represents a real opportunity to create bridges, through exchange, between countries and civilisations, just as the ancient silk routes once did,” Macron said.

“I think it's very important that Europe and China strengthen their collaboration on the initiative. France is ready to play a leading role in
this.”

But he warned that it should be carried out “within the framework of a balanced partnership” — a reference to concerns about China's trade
surpluses. France has a 30-billion-euro trade deficit with China.

He will deliver a keynote speech later in Xian on the future of Franco-Chinese relations.

Macron's first official visit to Asia marks a new stage for his diplomacy, which has so far been concentrated on Europe and Africa.

He plans to seek a “strategic partnership” with Beijing on issues including terrorism and climate change, and make Xi an ally in implementing the Paris
accord to fight climate change after the US pulled out of the deal.

After Xian, Macron will head to Beijing along with his delegation, which takes in some 60 business executives and institutions.

Emmanuel and Brigitte Macron will meet with Xi and his wife, Peng Liyuan, Monday night. On Tuesday, he will visit the Forbidden City, meet top Chinese officials and oversee the signing of business deals.

Human Rights Watch has urged Macron to publicly call for human rights improvements in China during his meeting with Xi, but the French president's office said the matter would be addressed privately.