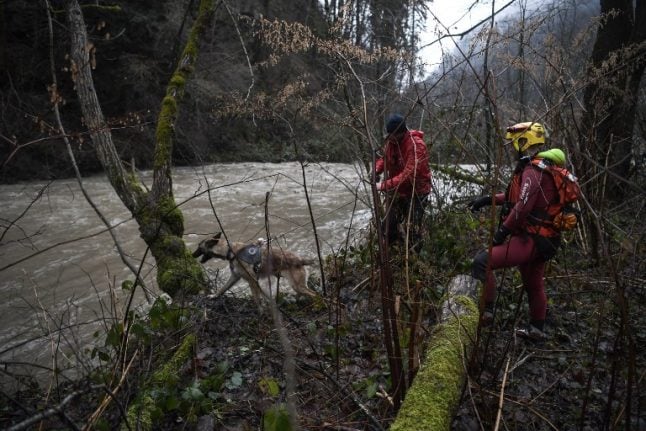 Much of France was on alert on Friday for flooding and avalanches after a week of wild weather claimed three lives and a firefighter remains missing.

While the gale force winds brought by Storm Eleanor have largely blown through there remained a risk of flooding in parts of south west France as well as Normandy and the east of the country, where torrential rain is forecast.

The River Seine burst its banks in the northern city of Rouen.

In all, 25 departments remained on orange alert – the second highest level of warning – with the public warned to be extremely vigilant in these areas.

Parts of the French Alps also remained on alert due to the increased risk of avalanches caused by heavy snowfall in recent days. Many ski pistes remain closed and access to certain ski stations was still blocked on Friday. On Thursday in the French Alps, firefighters said a woman in her 90s died of a heart attack in Crets-en-Belledonne after floods sent a torrent of mud and water into her home.

And a farmer in Savoie was found dead under a snowslide.

Meanwhile a French volunteer firefighter was reported missing after rushing to help when a car plunged into an overflowing river in the Alpine village of Le Moutaret.

According to France Info two other elderly men, one aged 81 from the Lucenay-L'Eveque in Burgundy and a 69-year-old from Haute-Marne in eastern France are also missing.

A skier was killed on Wednesday when a tree was blown over onto a piste at the ski resort of Morillon.

With the mountains packed with skiers for the school holidays, major resort Val d'Isere closed its runs for the day because of heavy snowfall, while Chamonix said it was shutting many of its lifts as a precautionary measure. “The objective is to keep everyone safe,” said David Ponson, ski chief in the Alpine Savoie region, as many pistes were shut for a second day.

At the other extreme, nearly 400 firefighters on the French Mediterranean island of Corsica were battling blazes fanned by Eleanor's strong gusts of wind, with three people injured in a fire overnight.

Three hundred goats were killed in the blaze at Chiatra-Canale di Verde near the island's east coast and 10 homes burnt — five of them completely destroyed, local authorities said.

The prefecture added that the intensity of the blazes was “exceptional in the middle of winter.” Troops from the local airbase have been deployed to help fight the flames.

Eleanor, the fourth winter storm to hit Europe since December, swept into the continent on Wednesday after battering Britain and Ireland.