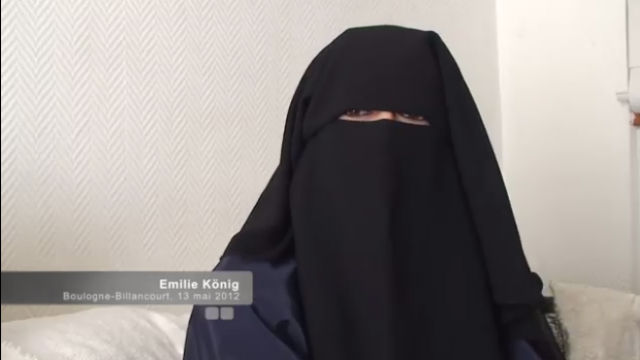 Photo: Screengrab from documentary made by Agnes D Feo

Female French jihadists arrested in Kurdish-held parts of Syria should face justice there so long as they can be guaranteed a fair trial, the French government said on Thursday.

Debate has been swirling in France over the fate of women who went to Syria to marry Islamist fighters and now find themselves in custody, following a series of defeats for the Islamic State group.

This week Emilie Konig, a 33-year-old Muslim convert from Brittany who became a notorious jihadist recruiter, became the latest of a string of European women to plead publicly to be repatriated.

But French government spokesman Benjamin Griveaux indicated Thursday that there were no plans to bring her home.

If “there are legal institutions capable of guaranteeing a fair trial assuring their right to a defence”, women arrested in Kurdish-held Syria should be “judged there”, Griveaux told RMC radio.

“Whatever crime may have been committed — even the most despicable — French citizens abroad must have a guaranteed right to a defence,” he added.

“We must have confirmation of that.”

Konig, who features on UN and US blacklists of dangerous militants, was arrested in early December and is being held in a Kurdish camp with her three
young children along with several other French women.

“They have been arrested, and as far as we know they did not surrender of their own accord,” Griveaux said. “They were arrested in combat.”

Konig's lawyer Bruno Vinay argued Wednesday that France must repatriate her under its “international commitments”.

A policeman's daughter who converted after meeting her first husband, Konig set off for Syria in 2012, leaving her first two children in France to join
her new partner, who was later killed.

She frequently appeared in propaganda videos and French intelligence intercepted messages to her contacts at home urging them to attack French
institutions or the wives of soldiers.

Some 30 French jihadists, both men and women, are currently in the custody of Kurdish and Iraqi forces, according to a source close to the investigation.

In October, around 20 families wrote to President Emmanuel Macron urging him to bring their daughters home to face the courts in France, warning they
could face torture or death if left in Syria or Iraq.

Of some 5,000 EU jihadists believed to have gone to fight, around a third have returned home, according to the Soufan Center, a US-based NGO that
conducts research on global security.

So far, France, Germany and Britain have tackled returnees on a case-by-case basis.

In France, rightwing politicians have come out firmly against repatriation, saying such women chose to betray their country and should be left to their fate.